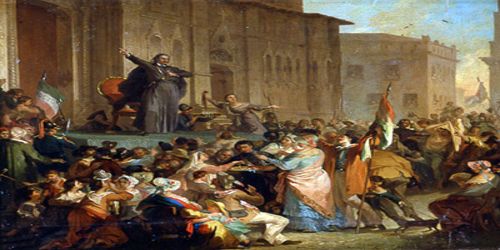 The Romans never had a written constitution, but their form of their government, especially from the time of the passage of the lex Hortensia (287 B.C.), roughly parallels the modern American division of executive, legislative, and judical branches, although the senate doesn’t neatly fit any of these categories. What follows is a fairly traditional, Mommsenian reconstruction, though at this level of detail most of the facts (if not the significance of, e.g., the patrician/plebian distinction) are not too controversial. One should be aware, however, of the difficulties surrounding the understanding of forms of government (as well as most other issues) during the first two centuries of the Republic. Collegiality: With the exception of the dictatorship, all offices were collegial, that is, held by at least two men. All members of a college were of equal rank and could veto acts of other members; higher magistrates could veto acts of lower magistrates. The name of each office listed below is followed (in parentheses) by the number of office-holders; note that in several cases the number changes over time (normally increasing).

Annual tenure: With the exception of the dictatorship (6 months) and the censorship (18 months), the term of office was limited to one year. The rules for holding office for multiple or sucessive terms were a matter of considerable contention over time.

CONSULS (2): chief civil and military magistrates; invested with imperium (consular imperium was considered maius (“greater”) than that of praetors); convened senate and curiate and centuriate assemblies.

QUAESTORS (2-40): financial officers and administrative assistants (civil and military); in charge of state treasury at Rome; in field, served as quartermasters and seconds- in-command.

TRIBUNES (2-10): charged with protection of lives and property of plebians; their persons were inviolable (sacrosanct); had power of veto (Lat. “I forbid”) over elections, laws, decrees of the senate, and the acts of all other magistrates (except dictator); convened tribal assembly and elicited plebiscites, which after 287 B.C. (lex Hortensia) had force of law.

CENSORS (2): elected every 5 years to conduct census, enroll new citizens, review roll of senate; controlled public morals and supervised leasing of public contracts; in protocol ranked below praetors and above aediles, but in practice, the pinnacle of a senatorial career (ex- consuls only) — enormous prestige and influence (auctoritas).

DICTATOR (1): in times of military emergency appointed by consuls; dictator appointed a Master of the Horse to lead cavalry; tenure limited to 6 months or duration of crisis, whichever was shorter; not subject to veto. CURIATE ASSEMBLY: oldest (early Rome); units of organization: the 30 curiae (sing: curia) of the early city (10 for each of the early, “Romulan” tribes), based on clan and family associations; became obsolete as a legislative body but preserved functions of endowing senior magistrates with imperium and witnessing religious affairs. The head of each curia ages at least 50 and elected for life; assembly effectively controled by patricians, partially through clientela)

CENTURIATE ASSEMBLY: most important; units of organization: 193 centuries, based on wealth and age; originally military units with membership based on capability to furnish armed men in groups of 100 (convened outside pomerium); elected censors and magistrates with imperium (consuls and praetors); proper body for declaring war; passed some laws (leges, sing. lex); served as highest court of appeal in cases involving capital punishment. 118 centuries controlled by top 3 of 9 “classes” (minimum property qualifications for third class in first cent. B.C.-HS 75,000); assembly controlled by landed aristocracy.

TRIBAL ASSEMBLY: originally for election of tribunes and deliberation of plebeians; units of organization: the urban and 31 rural tribes, based on place of residence until 241 B.C., thereafter local significance largely lost; elected lower magistrates (tribunes, aediles, quaestors); since simpler to convene and register 35 tribes than 193 centuries, more frequently used to pass legislation (plebiscites). Voting in favor of 31 less densely populated rural tribes; presence in Rome require to cast ballot: assembly controlled by landed aristocracy (villa owners). Eventually became chief law-making body. < criminal and civil — BRANCH>Civil litigation: chief official-Praetor. The praetor did not try cases but presided only in preliminary stages; determined nature of suit and issued a “formula” precisely defining the legal point(s) at issue, then assigned case to be tried before a delegated judge (iudex) or board of arbiters (3-5 recuperatores for minor cases, one of the four panels of “The one hundred men” (centumviri) for causes célèbres (inheritances and financial affairs of the rich)). Judge or arbiters heard case, rendered judgment, and imposed fine.

Criminal prosecution: originally major crimes against the state tried before centuriate assembly, but by late Republic (after Sulla) most cases prosecuted before one of the quaestiones perpetuae (“standing jury courts”), each with a specific jurisdiction, e.g., treason (maiestas), electoral corruption (ambitus), extortion in the provinces (repetundae), embezzlement of public funds, murder and poisoning, forgery, violence (vis), etc. Juries were large (c. 50-75 members), composed of senators and (after the tribunate of C. Gracchus in 122) knights, and were empanelled from an annual list of eligible jurors (briefly restricted to the senate again by Sulla).