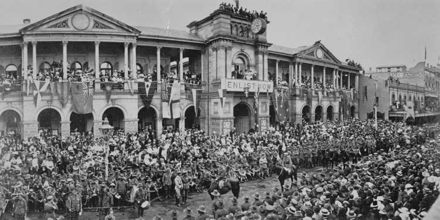 For Australia, as for many nations, the First World War remains the most costly conflict in terms of deaths and casualties. Australia’s early involvement in the Great War included the Australian Naval and Military Expeditionary Force landing at Rabaul on 11 September 1914 and taking possession of German New Guinea at Toma on 17 September 1914 and the neighbouring islands of the Bismarck Archipelago in October 1914. On 14 November 1914 the Royal Australian Navy made a significant contribution when HMAS Sydney destroyed the German raider SMS Emden.