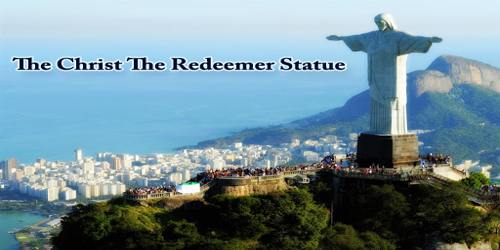 The Christ The Redeemer Statue

Christ the Redeemer (Portuguese: Cristo Redentor, standard Brazilian Portuguese: (ˈkɾistu ʁedẽˈtoʁ), local pronunciation: ˈkɾiɕtŭ̻ xe̞dẽ̞ˈtoɦ), is a statue of Jesus Christ in Rio de Janeiro, Brazil; considered the largest Art Deco statue in the world and the 5th largest statue of Jesus in the world. Constructed between 1922 and 1931, the statue is 30 metres (98 ft) high, excluding its 8-metre (26 ft) pedestal. The arms stretch 28 metres (92 ft) wide. Although it is one of the most known and visited tourist attractions in Rio de Janeiro and Brazil, few people know Christ the Redeemer’s history and how this huge and imposing statue was designed.

The statue, made of reinforced concrete clad in a mosaic of thousands of triangular soapstone tiles, sits on a square stone pedestal base about 26 feet (8 metres) high, which itself is situated on a deck atop the mountain’s summit. The statue is the largest Art Deco-style sculpture in the world and is one of Rio de Janeiro’s most recognizable landmarks. 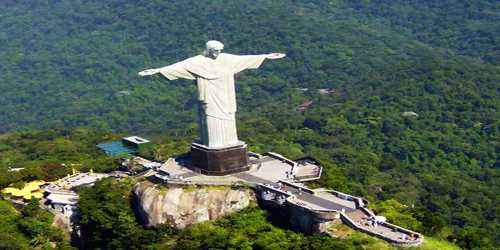 The statue weighs 635 metric tons (625 long, 700 short tons), and is located at the peak of the 700-metre (2,300 ft) Corcovado mountain in the Tijuca Forest National Park overlooking the city of Rio de Janeiro. A symbol of Christianity across the world, the statue has also become a cultural icon of both Rio de Janeiro and Brazil, and is listed as one of the New7Wonders of the World. It is made of reinforced concrete and soapstone.

Following the end of World War I, many members of the primarily Roman Catholic community in Brazil were concerned about what they felt was a growing “godlessness” around them. Some of this was the result of the country becoming a republic in 1893 causing the official separation of the church from the state. Members of Catholic community felt that they could reclaim the country for Christianity by constructing a prominent symbol in Rio, which was then the capital city. One idea was to build a huge statue of Christ. This proposal had been around since the 1850’s when it had been suggested by the Vincentian priest, Pedro Maria Boss, but not much had been done about it.

Initially, it was proposed that a bronze statue of Christ would be built on the Sugar Loaf (a giant, steep, mound of rock at the entrance to Rio’s Guanabara Bay). However, it was decided that the peak of Mount Corcovado, which was higher and overlooked the city, would be a better location.

In the 1850s the Vincentian priest Pedro Maria Boss suggested placing a Christian monument on Mount Corcovado to honour Isabel, princess regent of Brazil and the daughter of Emperor Pedro II, although the project was never approved. In 1921 the Roman Catholic archdiocese of Rio de Janeiro proposed that a statue of Christ be built on the 2,310-foot (704-metre) summit, which, because of its commanding height, would make it visible from anywhere in Rio. Citizens petitioned Pres. Epitácio Pessoa to allow the construction of the statue on Mount Corcovado. Local engineer Heitor da Silva Costa designed the statue. French sculptor Paul Landowski created the work.

In 1922, Landowski commissioned fellow Parisian Romanian sculptor Gheorghe Leonida, who studied sculpture at the Fine Arts Conservatory in Bucharest and in Italy. A group of engineers and technicians studied Landowski’s submissions and felt building the structure of reinforced concrete (designed by Albert Caquot) instead of steel was more suitable for the cross-shaped statue. The concrete making up the base was supplied from Limhamn, Sweden. The outer layers are soapstone, chosen for its enduring qualities and ease of use.

The project was a joint work of the designer Heitor da Silva Costa, the painter Carlos Oswald and the sculptor Maximilian Paul Landowski. Christ the Redeemer is an Art Deco-style sculpture, with open arms in a cross shape, 38 meters (124ft) high which equivalents to a 13-storey building. Of this amount, 30 meters (98ft) corresponds to the monument and the other 8 meters (26ft) corresponds to the pedestal. Each arm occupies an area of ​​88 square meters (947 ft²) and the foot measures 1.35 meters (4ft). The total weight of the statue is approximately 1145 tons, of which 30 tons correspond only the head.

Hands and head are the only parts of Christ the Redeemer that weren’t built in Brazil. They were shaped in Paris. The statue’s body is made entirely of soapstone, cut into triangles, glued by hand in a fabric and applied in the structure made of reinforced concrete. The monument is made to withstand winds of up to 250 km per hour.

Construction took nine years, from 1922 to 1931 and cost the equivalent of US$250,000 (equivalent to $3,600,000 in 2019) and the monument opened on October 12, 1931. During the opening ceremony, the statue was to be lit by a battery of floodlights turned on remotely by Italian shortwave radio inventor Guglielmo Marconi, stationed 9,200 kilometres (5,700 mi) away in Rome but because of bad weather, the lights were activated on-site.

Over the years it has undergone periodic repairs and renovations, including a thorough cleaning in 1980, in preparation for the visit of Pope John Paul II to Brazil that year, and a major project in 2010, when the surface was repaired and refurbished. Escalators and panoramic elevators were added beginning in 2002; previously, in order to reach the statue itself, tourists climbed more than 200 steps as the last stage of the trip. In 2006, to mark the statue’s 75th anniversary, a chapel at its base was consecrated to Our Lady of Aparecida, the patron saint of Brazil. 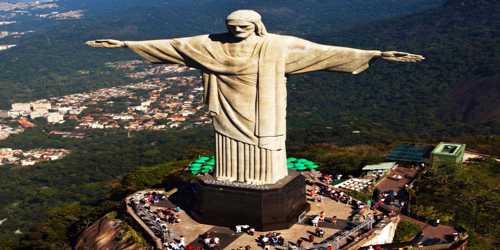 Lightning struck the statue during a violent thunderstorm on February 10, 2008, causing some damage to the fingers, head and eyebrows. The Rio de Janeiro state government initiated a restoration effort to replace some of the outer soapstone layers and repair the lightning rods on the statue. Lightning damaged it again, on January 17, 2014, dislodging a finger on the right hand. Authorities had to act quickly to get the colossal statue back in shape before the capital swelled with visitors for the World Cup in June of that year.

Workers can enter the statue via a door in the hem of the robe, just behind where the right ankle would be. From there, they can climb stairs up the interior the equivalent of 12 stories to the chest where they can cross into narrow tunnels that extend out the arms or up through a trap door on the right shoulder. From hidden exits like these, they can repel like mountain climbers down the outside of the statue to repair damaged sections.

In 2010, a massive restoration of the statue began. Work included cleaning, replacing the mortar and soapstone on the exterior, restoring iron in the internal structure, and waterproofing the monument. Vandals attacked the statue during renovation, spraying paint along the arm. Mayor Eduardo Paes called the act “a crime against the nation”. The culprits later apologized and presented themselves to the police.

Even with the famous statue aging and slowly turning color, it is expected that Christ the Redeemer will continue to be a popular symbol of the city and a well-liked spot for tourists to come to as they visit the city of Rio de Janeiro.