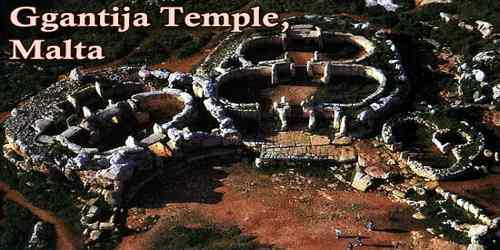 “Ġgantija” (Maltese pronunciation: [dʒɡanˈtiːja], “Giantess”) is a megalithic temple complex from the Neolithic on the Mediterranean island of Gozo. The Ġgantija Temples exceed 5 meters in length and weigh over 50 tons. Certainly, these ancient structures represent a phenomenal cultural, artistic and technological development in a very early period in human life. The Ġgantija Temples are the earliest of the ‘Megalithic Temples’ of Malta and are older than the pyramids of Egypt. Their makers erected the two Ġgantija temples during the Neolithic (c. 3600-2500 BC), which makes these temples more than 5500 years old and the world’s second-oldest existing manmade religious structures after Göbekli Tepe in present-day Turkey. Together with other similar structures, these have been designated a UNESCO World Heritage Site, the Megalithic Temples of Malta. 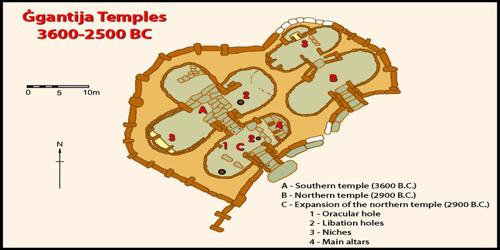 The name of the temples stems from the word ‘ġgant’, which is Maltese for a giant. The reason for this is because the people of the island once believe that the temples were built by a race of giants. Those people who visit the temples can probably see where this name comes from. The temples are elements of a ceremonial site in a fertility rite. Researchers have found that the numerous figurines and statues found on site are associated with that cult. According to local Gozitan folklore, a giantess who ate nothing but broad beans and honey bore a child from a man of the common people. With the child hanging from her shoulder, she built these temples and used them as places of worship.

The Ġgantija temples stand at the edge of the ‘Xagħra plateau’, facing toward the south-east. This megalithic monument encompasses two temples and an incomplete third, of which only the facade was partially built before being abandoned. Like Mnajdra South, it faces the equinox sunrise, built side by side and enclosed within a boundary wall. The southerly one is the larger and older one, dating back to approximately 3600 BC. It is also better preserved. The plan of the temple incorporates five large apses, with traces of the plaster that once covered the irregular wall still clinging between the blocks. The temples are built in the typical clover-leaf shape, with inner-facing blocks marking the shape. The space between the walls was then filled in with rubble. A series of semi-circular apses is connected with a central passage. Archaeologists believe that the apses were originally covered by roofing.

Every part of the temple is made from limestone. The outer walls are built from incredibly hard-wearing coralline limestone, which is one of the reasons why they appear to have stood the test of time for so long. The interior of the temple is then made from Globigerina limestone which is known to be softer and smoother too. This variety of limestone appears in the doorways, altars, and decorative slabs. There is also evidence that the internal walls of the temple were then plastered and painted, as two fragments have been found which are marked with red ochre and have been preserved in a museum.

Remains of animal bone discovered in this site suggest some sort of ritual involving animal sacrifice. The use of fire is shown by the presence of stone hearths. A number of libation holes in the floor may have been used for the pouring of liquid offerings. It is probable that during ceremonial activities, the congregation would have assembled outside the temple complex since the large forecourt in front of the two temples was purposely raised by the same temple builders.

The Ġgantija temples were listed as a UNESCO World Heritage Site in 1980. In 1992, the Committee decided to expand the listing to include five other megalithic temples located across the islands of Malta and Gozo. The Ġgantija listing was renamed “the Megalithic Temples of Malta.” The temple and the surrounding areas were restored or rehabilitated in the 2000s. Lightweight walkways were installed in the temple in 2011, to protect the floor. A heritage park was developed and opened in 2013.