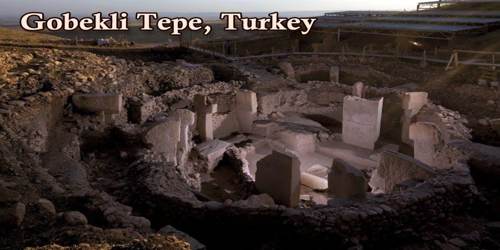 “Göbekli Tepe” (Turkish: ɟœbecˈli teˈpe; Turkish for “Potbelly Hill”), which is actually a complex comprised of many temples, may have been the first temple in the world made by man. It is an archaeological site in the Southeastern Anatolia Region of Turkey approximately 12 km (7 mi) northeast of the city of Şanlıurfa. The tell (artificial mound) has a height of 15 m (49 ft) and is about 300 m (980 ft) in diameter. It is approximately 760 m (2,490 ft) above sea level. The site, believed to have been a sanctuary of ritual significance, is marked by layers of carved megaliths and is estimated to date to the 9th-10th millennium BCE.

At “Göbekli Tepe,” near the Syrian border, a number of T-shaped limestone megaliths, some of which surpass 16 feet (5 meters) in height and weigh as much as 50 tons, are arranged in circular formations. Several such formations are positioned on top of one another: each completed circle was covered with dirt, and the process began again atop the same site. While some of the megaliths are blank, others are carved on their broader sides with elaborate designs featuring foxes, scorpions, lions, and other imagery. Massive carved stones about 11,000 years old crafted and arranged by prehistoric people who had not yet developed metal tools or even pottery. The megaliths predate Stonehenge by some 6,000 years. 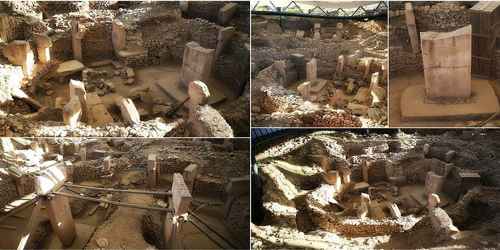 According to archaeology, people of that era were considered to be unsophisticated hunters. The importance of “Göbekli Tepe” lies in the fact that the people who lived there were much more advanced than previously imagined. Proponents of Ancient Astronaut Theory maintain that beings from another planet could have aided mankind in these ancient times and enabled them to create impressive structures not just in Turkey, but in many countries throughout the world.

“This area was like a paradise,” says Schmidt, a member of the German Archaeological Institute. Indeed, “Gobekli Tepe” sits at the northern edge of the Fertile Crescent an arc of a mild climate and arable land from the Persian Gulf to present-day Lebanon, Israel, Jordan, and Egypt and would have attracted hunter-gatherers from Africa and the Levant. And partly because Schmidt has found no evidence that people permanently resided on the summit of “Gobekli Tepe” itself, he believes this was a place of worship on unprecedented scale humanity’s first “cathedral on a hill.”

“Göbekli Tepe changes everything,” says Stanford University’s Ian Hodder. Furthermore, many have proposed that “Göbekli Tepe” can even be a temple inside the Biblical Eden of Genesis.

“Göbekli Tepe,” was first investigated in the 1960s (conducted by Istanbul University and the University of Chicago) but was dismissed as a medieval cemetery. It was explored again in the 1990s, when its true age, which was estimated by comparing the remnants of tools discovered at the site with those that had been carbon-dated from nearby sites, was revealed. The remains of undomesticated plant material and tens of thousands of wild animal bones chiefly gazelle bones have been uncovered there, but the lack of trash pits, hearths, or other signals of domestic life indicates that it was most likely not a permanent settlement. Most experts instead identify it as a ritual site, one that may have attracted worshipers from great distances.

In 2010, the Global Heritage Fund (GHF) announced it will undertake a multi-year conservation program to preserve ‘Göbekli Tepe.’ Partners include the German Archaeological Institute, German Research Foundation, Şanlıurfa Municipal Government, the Turkish Ministry of Tourism and Culture and, formerly, Klaus Schmidt. The stated goals of the GHF ‘Göbekli Tepe’ project are to support the preparation of site management and conservation plan, construction of a shelter over the exposed archaeological features, training community members in guiding and conservation, and helping Turkish authorities secure UNESCO World Heritage Site designation for GT.

Perhaps, Schmidt (a member of the German Archaeological Institute) says, the site was a burial ground or the center of a death cult, the dead laid out on the hillside among the stylized gods and spirits of the afterlife. If so, Gobekli Tepe’s location was no accident. “From here the dead are looking out at the ideal view,” Schmidt says as the sun casts long shadows over the half-buried pillars. “They’re looking out over a hunter’s dream.”