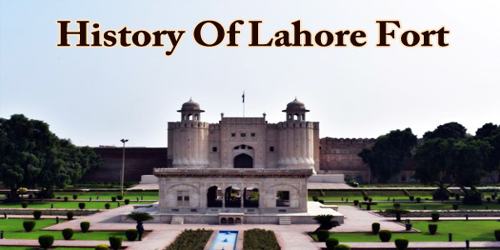 Lahore Fort (also known as ‘Shahi Qila’, or “Royal Fort”) was originally designed to protect the Northern-Western entrance to the walled, old city of Lahore in Pakistan. It is a citadel in the city of Lahore, Punjab, Pakistan. Lahore is a historical city filled with landmarks. People can also say that Lahore carries a lot of figments from the past. Lahore has been the cultural and social hub for the subcontinent for century’s Enumerable emperor’s set foot in this city and constructed a number of grandiloquent structures that still carry the weight of history. Lahore fort is one of the pillars of this rich legacy of this city.

The fortress is located at the northern end of walled city Lahore and spreads over an area greater than 20 hectares. It contains 21 notable monuments, some of which date to the era of Emperor Akbar. The Lahore Fort is notable for having been almost entirely rebuilt in the 17th century when the Mughal Empire was at the height of its splendor and opulence.

Spanning over 20 hectares, Lahore Fort is a magnificent treasury of 21 notable monuments dated back to Mughal Emperor Akbar. Mughal rulers had built the whole structure in 17th during the boom of Mughal’s glory and opulence. After the fall of the Mughal Empire, Lahore Fort was used as the residence of Emperor Ranjit Singh, founder of the Sikh Empire. The fort then passed to British colonialists after they annexed Punjab following their victory over the Sikhs at the Battle of Gujrat in February 1849.

In 1981, the fort was listed in the UNESCO World Heritage Sites and received a generous donation for preservation and conservation. 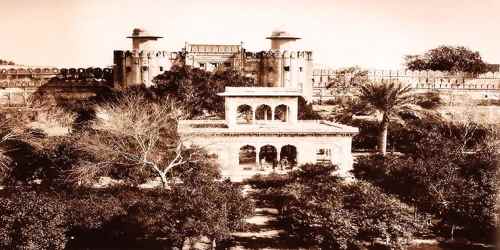 History of the fort –

The fort at Lahore is the result of many centuries’ work. According to the Pakistani historian Wali Ullah Khan, the earliest reference to the fort comes in a history of Lahur (Lahore) compiled by Al-Biruni, which refers to a fort constructed in the early 11th century. He further notes that Munshi Sujan Rae Bhandari, author of the Khulasatut Tawarikh in 1695-96 A.D., records that Malik Ayaz, a favorite of Sultan Mahmud, built a masonry fort at Lahore and repopulated the city. Khan believes it is the same fort that was damaged by the Mongols in 1241 and again in 1398 by a detachment of Timur’s army, then rebuilt again in 1421 by Sayyid, son of Khizr Khan.

In the 1430s, the fort was occupied by Shaikh Ali of Kabul. and remained under the control of the Pashtun sultans of the Lodi dynasty until Lahore was captured by the Mughal Emperor Babur in 1526.

The early history of the fort is subject to debate, but it is known for certain that the fort was extensively upgraded during the reign of Emperor Akbar (mid-16th century). Sometime before 1566, the mud-brick fort was demolished and replaced with burnt bricks. The exact date is not known for certain since the records first refer to a fort at Lahore in connection with the rebellion of Muhammad Hakim in 1566.

The present design and structure of the fort trace its origins to 1575 when the Mughal Emperor Akbar occupied the site as a post to guard the northwest frontier of the empire. The strategic location of Lahore, between the Mughal territories and the strongholds of Kabul, Multan, and Kashmir necessitated the dismantling of the old mud-fort and fortification with solid brick masonry. Lofty palaces were built over time, along with lush gardens. Notable Akbar period structures included the Doulat Khana-e-Khas-o-Am, Jharoka-e-Darshan, and Akbari Gate. Many Akbari structures were modified or replaced by subsequent rulers.

In 1594, Akbar quit Lahore forever. During his reign, he enclosed Lahore with a strong 30 feet high wall. The fort was rebuilt and palaces were added. That was the golden period of Lahore and people enjoyed it. A few years after Jahangir’s succession to the throne in 1605 A.D., his own son, Prince Khusro seized the suburbs of Lahore and besieged the fort with the involvement of the fifth Sikh Guru, Siri Arjan Dev. Jahangir defeated his son at Lahore and set up his court in Lahore in 1622 A.D. The emperor, however, died in 1627 and was buried in Lahore.

The fort was modified by Jehangir in 1618 and later damaged by the Sikhs and the British, although it has now been partially restored. Within it is a succession of stately palaces, halls, and gardens built by Mughal emperors Akbar, Jehangir, Shah Jahan, and Aurangzeb, comparable to and contemporary with the other great Mughal forts at Delhi and Agra in India. It’s believed that the site conceals some of Lahore’s most ancient remains. The Mosque of Mariyam Zamani Begum was built adjacent to the forts of eastern walls during the reign of Jahangir. While the mosque likely served as a Friday congregational mosque for members of the Royal Court, it was not financed by Jahangir, although it likely required his approval.

The fort has an appealing ‘abandoned’ atmosphere (unless it’s packed with visitors) and although it’s not as elaborate as most of India’s premier forts, it’s still a fabulous place to simply wander around.

Shah Jahan’s first contribution to the fort commenced in the year of his coronation, 1628, and continued until 1645. Shah Jahan first ordered the construction of the Diwan-i-Aam in the style of a Chehel Sotoun – a Persian style 40-pillar public audience hall. The fort is entered on its western side through the colossal Alamgiri Gate, built by Aurangzeb in 1674 as a private entrance to the royal quarters. It was large enough to allow several elephants carrying members of the royal household to enter at one time. The small Moti Masjid (Pearl Mosque) was built by Shah Jahan in 1644 for the private use of the ladies of the royal household and was restored to its original delicacy in 1904.

During the period of Sikh occupation, Ranjit Singh added several pavilions on the upper ramparts. Modifications to the fort were even made during the British colonial period beginning in 1846 but consisted mainly of converting older buildings into hospitals, barracks, and other colonial functions. Perhaps worst of all, portions of the gardens were converted into tennis courts, but abuses such as this have been corrected as preservationists have slowly restored portions of the fort to its pre-1846 appearance.

In the 80 years, the British used it as a cantonment, the Lahore Fort has had to bear a large number of interventions like the Diwan-e-Aam being converted to military barracks then to a dispensary. Diwan-e-Khas was used as Church-cum-residence, Moti Masjid as treasury, basement chambers as liquor cellars as well as a number of new offices, storage facilities, and stables were added to the site of the fort.

Excavations in 1959 in front of Diwan-i-Am led to the discovery of a gold coin dated 1025 CE belonging to Mahmud Ghaznavi. The coin was unearthed at the depth of 25 feet (7.6 m) from the lawn. The cultural layers were continuous to the depth of 15 feet (4.6 m) indicating that the fort was inhabited by people even before his conquest.

While relaying the deteriorated floor of Akbari Gate in April 2007, three floors in the fort were unearthed belonging to the British, Sikh, and Mughal periods. The floor of the British, Sikh, and Mughal periods was constructed with bricks, burnt bricks, and pebbles respectively. The latter either built during Jahangir’s or Shah Jahan’s era was the hallmark of Mughals.

The whole fort is divided into two sections, the first administrative section, connected with entrance, and includes gardens of Diwan-e-Khas but the second section is dedicated to royal residence and approachable from the elephant gate. Sheesh, Mahal, and small gardens are also included in this section. The exterior walls of the 2nd section are furnished with blue Persian Kashi tiles, Mosaic art, and calligraphy. The huge Picture Wall has been taken as the triumph of Lahore Fort and exquisitely decorated with the vibrant pattern of glazed tiles, faience mosaics, and fresco. Stretching to the northern and western walls of the city, the embellish wall is approximately 1450 feet long and contains 116 panels that interpret multiple subjects like elephant fights, angels, and polo games.

In short, Lahore Fort is the majestic spectacle of Lahore that depicts the glorious history and culture of Lahore’s Walled City and requires an extensive amount of time and endurance to explore and appreciate.