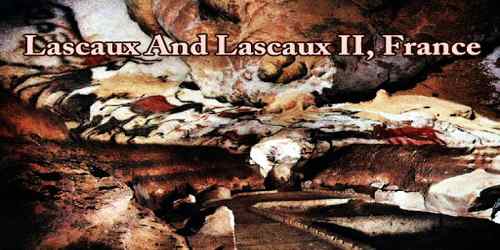 Lascaux (French: Grotte de Lascaux, “Lascaux Cave”; English: /læsˈkoʊ/, French: lasko) cave containing one of the most outstanding displays of prehistoric art yet discovered. Located above the Vézère River valley near Montignac, in Dordogne, France, the cave is a short distance upstream from the Eyzies-de-Tayac series of caves. Lascaux, together with some two dozen other painted caves and 150 prehistoric settlements in the Vézère valley, was designated a UNESCO World Heritage Site in 1979.

Over 600 parietal wall paintings cover the interior walls and ceilings of the cave. The paintings represent primarily large animals, typical local and contemporary fauna that correspond with the fossil record of the Upper Paleolithic time. The drawings are the combined effort of many generations, and with continued debate, the age of the paintings is estimated at around 17,000 years (early Magdalenian). 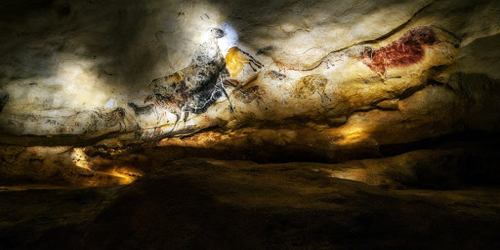 On 12th September 1940 CE, four boys examined the fox hole down which their dog had fallen on the hill of Lascaux. After widening the entrance, Marcel Ravidat was the first one to slide all the way to the bottom, his three friends following after him. After constructing a makeshift lamp to light their way, they found a wider variety of animals than expected; in the Axial Gallery, they first encountered the depictions on the walls. The following day they returned, better prepared this time, and explored deeper parts of the cave. The boys, in awe of what they had found, told their teacher, after which the process towards excavating the cave was set in motion.

The cave complex was opened to the public on 14 July 1948, and initial archaeological investigations began a year later, focusing on the Shaft. By 1955, carbon dioxide, heat, humidity, and other contaminants produced by 1,200 visitors per day had visibly damaged the paintings. As air condition deteriorated, fungi and lichen increasingly infested the walls. Consequently, the cave was closed to the public in 1963, the paintings were restored to their original state, and a monitoring system on a daily basis was introduced.

Each is magnificently decorated with engraved, drawn, and painted figures, in all some 600 painted and drawn animals and symbols and nearly 1,500 engravings. The paintings were done on a light background in various shades of red, black, brown, and yellow. In places, a scaffolding was clearly used to reach high walls and the ceiling. Among the most remarkable pictures are four huge aurochs (some 16 feet (5 meters) long), their horns portrayed in a “twisted perspective”; a curious two-horned animal (misleadingly nicknamed the “unicorn”), perhaps intended as a mythical creature; red deer with fantastic antlers; numerous horses; the heads and necks of several stages (3 feet (almost 1 meter) tall), which appear to be swimming across a river; a series of six felines; two male bison; and rare narrative composition, at the bottom of a shaft, that has been variously interpreted as a hunting accident or as a shamanistic scene. 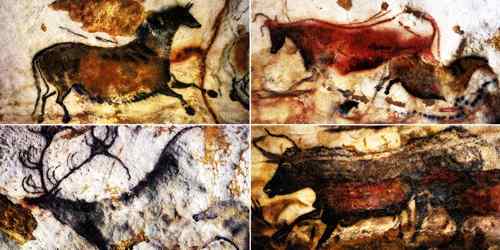 Lascaux II is a replica of the cave of Lascaux the most well-known Stone Age cave art site in Europe, if not the world. Before being displayed from 1983 in the cave’s vicinity (about 200 m away from the original cave), a compromise and attempt to present an impression of the paintings’ scale and composition for the public without harming the originals. A full range of Lascaux’s parietal art is presented a few kilometers from the site at the Centre of Prehistoric Art, Le Parc du Thot, where there are also live animals representing ice-age fauna.

The replica contains the main sections of the cave and provides visitors with an opportunity to see some of the very striking painted panels from Lascaux. Although you are looking at a replica, the accuracy of the replica is measured in millimeters. For anyone with even the slightest interest in prehistory and prehistoric art, Lascaux II is a must.

Despite its fame and importance, Lascaux is very poorly dated. Radiocarbon dating of some charcoal has given a date of 17,000 years ago, and the orthodox view is that the cave is a largely homogeneous collection of images spanning at most a few centuries before and after that date. Other specialists are certain that the cave’s art is a highly complex accumulation of artistic episodes spanning a much longer period. The cave was in perfect condition when first discovered and was opened to the public in 1948; its floor level was quickly lowered to accommodate a walkway. The ensuing pedestrian traffic (as many as 100,000 annual visitors) and the use of artificial lighting caused the once-vivid colors to fade and brought about the growth of algae, bacteria, and crystals. A huge amount of crucial archaeological information and material was destroyed in the process.

Besides the paintings, many tools were found at Lascaux. Among these are many flint tools, some of which display signs of being used specifically for carving engravings into the walls. Bone tools were also present. The pigments used at Lascaux contain traces of reindeer antler, most likely introduced either because antler was carved right next to the pigments or because it was used to mix the pigments into water. The remains of shellfish shells, some of them pierced, tie in well with other evidence of personal adornment found among humans living in Europe during the Upper Palaeolithic. 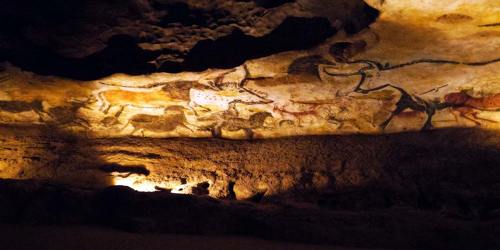 The most famous section of the cave is ‘The Hall of the Bulls’ where bulls, equines, aurochs, stags and the only bear in the cave are depicted. The four black bulls, or aurochs, are the dominant figures among the 36 animals represented here. One of the bulls is 5.2 meters (17 ft) long, the largest animal discovered so far in cave art. Additionally, the bulls appear to be in motion.

A painting referred to as “The Crossed Bison”, found in the chamber called the Nave, is often submitted as an example of the skill of the Paleolithic cave painters. The crossed hind legs create the illusion that one bison is closer to the viewer than the other. This visual depth in the scene demonstrates a primitive form of perspective which was particularly advanced for the time.

Thus, in 1963 the cave was again closed; the growth of crystals was halted, while the growth of algae and bacteria was both halted and reversed. In 2001 microorganisms, mushrooms, and bacteria were again noted in the cave, and daily monitoring of conditions continues.

In 2007, a new fungus, which has created grey and black blemishes, began spreading in the real cave. The problem is ongoing, as are efforts to control the microbial and fungal growths in the cave. The fungal infection crises have led to the establishment of an International Scientific Committee for Lascaux and to rethinking how, and how much, human access should be permitted in caves containing prehistoric art.