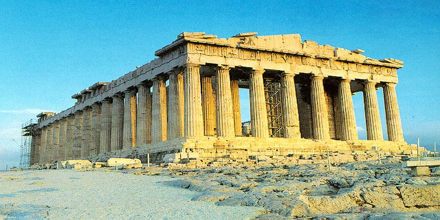 Principle objective of this lecture is to present on Ancient Greece. Greece is a peninsula about the size of Louisiana in the Mediterranean Sea. It’s very close to Egypt, the Persian empire (includes Turkey) and Rome. Greece is mountainous, Greek communities often times developed independently because of the mountains, thus they were diverse. As a result, they fought each other a lot. Since Greek coastal cities were sandwiched between the ocean and the sea, they developed an awesome navy for trading and fighting. All cities need fresh water. This is a Greek aqueduct, basically a brick water pipe. The first aqueduct was Assyrian, but most ancient societies had them.