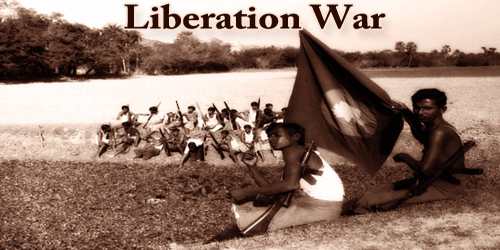 The people of Bangladesh discovered their identity through the Language Movement in 1952. The struggle to establish their identity and national spirit began soon after 1947 when they realized that under Pakistan created on the two-nation theory they was little scope for the distance culture of Banglees to flourish.

The refusal of the central government to grant status to Bangla language became the focal point of struggle because the language was the most important vehicle of the cultural expression of the people of this land.

The contradiction of the two Pakistans, the racial oppression and the exploitation of the West over the East was gradually unveiled. The struggle for the consciousness of identity and cultural freedom which began with the advent of the student movements of the ’60s gained momentum in the mass movement of 1969. Though it brought about the fall of a mighty military ruler like Ayub Khan, the ultimate goal was not achieved. After this, came the election of 1970 with an absolute victory of Sheikh Mujibur Rahaman. In the elections of December 7, 1970, the Awami League won 160 out of 162 seats in East Pakistan, all but two, and would have had a clear majority in the new assembly had it been convened. Sheikh Mujibur Rahman became the majority party leader of the Pakistan National Assembly. The military rules of Pakistan refused to allow the Awami League to form a government. Major General Ziaur Rahman on behalf of Mujib declared independence. A full-scale movement of non-cooperation with the military government began on the 26th of March, 1971 which is celebrated as Independence Day every year. Thus Bangladesh plunged into a civil war.

The Pakistan Army began their genocide by attacking the innocent Bangalees of Dhaka city. The dwellers of Dhaka city never confronted such intolerable days. The Pakistani army massacred 35,000 Bengali intellectuals and unleashed a brutal war against the Bangalees of East Pakistan to prevent their secession. The dream encircled flag during the nine-month struggle which ensued an estimated three million Bengalis died and ten million refugees fled into India, Sheikh Mujib was imprisoned in West Pakistan. A Bangladesh Government in exile was established. The actual military campaign took place in December and lasted only ten days. The Indian Army launched a massive offensive against the Pakistani forces to support the Bangladesh movement. On December 16, 1971, the Pakistan army surrendered.