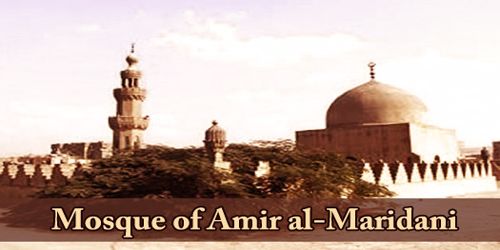 The Amir Altinbugha al-Maridani Mosque, one of the finest 14th-century monuments, was built in 1340 by Amir (Prince) “Altunbugha al-Maridani”. It is a mosque dating back to the Mamluk Sultanate of Cairo, Egypt; situated in the Darb al-Ahmar neighborhood south of Bab Zuweila. The mosque has a hypostyle plan similar to the al-Nasir mosque, and its exterior walls are painted in the traditional Mamluk style of architecture.

Amir Al-Maridani, who had been one of the sons-in-law of Sultan Al-Nasir Mohammed, designed his mosque on the Citadel following the conventional hypostyle design quite similar to the mosque of Al-Nasir Mohammed. It is documented that the Sultan took an active interest in building the mosque, providing the building materials just as he did with another son-in-law, Amir Aqsunqur. His mosque, the Aqsunqur or Blue Mosque, is found further along the same street. 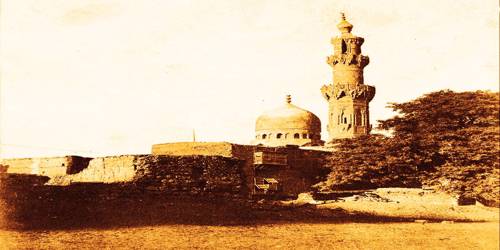 The earliest photo of “Mosque of Amir al-Maridani” at 1854

The mosque is a hypostyle mosque with marble columns supporting pointed stone arches in front of the mihrab and has a domed, nine-bay maqsura. The exterior facades are adorned with stalactites topped with recessed doors. A stepped exterior architecture cleverly overcomes the difference between the street alignment and the interior which is directed towards Mecca. At the time of its building, it was one of the most extravagantly decorated mosques in Cairo, marked by the first fully octagonal minaret and large dome, as well as other architectural innovations.

The land for the Mosque was in Cairo’s Tabbana quarter, and was originally a burial area; in the Islamic year 738 (1337-8 CE), al-Maridani purchased the area the sultan was commissioning the mosque on. This mosque still retains much of its original furnishings. It was restored by the French Committee during 1895–1903. Almost all available materials and techniques available at the time were applied; including marble incrustation, stucco, wooden, and stone carving.

Designed with both hypostyle and riwaq plans, the Amir al-Maridani Mosque is identical to the sultan’s mosque in the Citadel, with a dome over the mihrab and three axial entrances. Like those of the arcades, the marble columns support pointed arches whose stone voussoirs are framed with a continuous molding that forms a circle above the keystone of each arch. Over these arches is a series of alternating niches and medallions arched with keels. One lozenge is above each medallion. The niches, medallions, and lozenges are all stucco-carved. A line of stepped crenellation decorated with stucco carved arabesques runs along the summit of the facades of the courtyard. 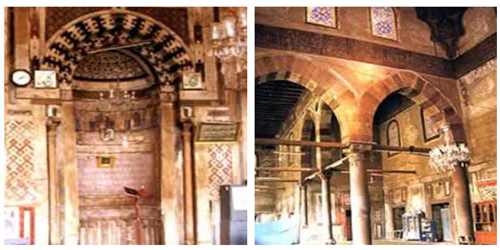 (View of the main prayer hall “Qibla”; The Mihrab also found in the Qibla)

Like many other religious buildings, the interior of the Al-Maridani Mosque is moved with a stair-step structure to turn it towards Mecca at a different angle from that of the street alignment. The exterior façades are lined with recessed panels topped with two windows on each side, with stalactite hoods. A Quranic inscription band runs along the top. The minaret has an entirely octagonal shaft and is topped by a pavilion consisting of eight slender columns surmounted by a bulb on a muqarnas cornice. The golden band running from the main entrance along with the entire facade breaks on the wall underneath the minaret, and its colonettes are absent from the corner closest to the mosque. Also, the minaret buttress is built with different stone than the rest of the mosque, suggesting that this part of the wall has been restored.

The interior of the mosque consists of a central vast open courtyard surrounded by four arcaded halls “riwaqs”; pointed stone arches supported with marble columns. Seen over those arches are a series of alternating keel-arched niches and medallions, a lozenge shape over each medallion. The stones are placed on the keystone of each arch, with a continuous molding that forms a circle. The courtyard area is divided by a mashrabiyya from the sanctuary, on which is a large inscription of the Qur’an. This wooden screen mostly shades the sanctuary from the courtyard’s light, making the double windows in the outer wall necessary.

The qibla wall is adorned with the remains of golden stucco and epigraphic bands at the middle of which are plants. These trees are one of the only naturalistic elements that still remain in Mamluk architectural decoration. There is a kind of beautifully wooden carved fountain in the center of the arcaded courtyard, in the shape of a domed, small pavilion-like roof. The fountain was usually built to allow many worshippers to wash before prayer at the same time under running water. The dome, above the mihrab room, is slightly smaller than the Al-Nasir Muhammad Mosque dome and has similarly gold-painted wooden pendants. The windows in the transitional zone between ceiling and dome are of one oculus over two bays and are decorated with stucco arabesque grills filled with colored glass. 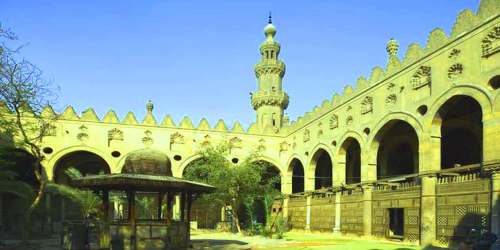 Courtyard of the Mosque of Amir al-Maridani

The Al-Maridani Mosque is considered one of the significant remaining mosques from the Mamluk era (1250 AD-1527 AD) that left behind a rich heritage of architectural buildings combining religious, funerary, educational, and other functions into multifunctional complexes. The mosque was restored in 1895–1903 by the Committee for the Protection of the Monuments of Arab History. However, it has suffered from neglect and steady degradation since. The wooden insets which make up the minbar’s ornament were looted between 2007 and 2010. The Egyptian Government, in partnership with the Aga Khan Cultural Services-Egypt (part of the Aga Khan Development Network), has undertaken a major reconstruction and renovation project, which was launched in 2018 and is scheduled to last until 2020.