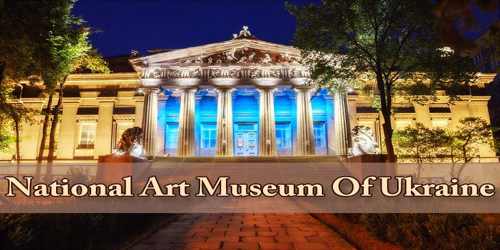 National Art Museum of Ukraine (Ukrainian: Національний Художній Музей України) is the central art museum of Ukraine, in Kiev. It was established in 1897 by a successful patron of the arts, Bohdan Khanenko, who was determined to build the first museum in the country. Succeed he did the historically important building contains a collection of important sculptures, artwork, and icons. It is located in a building that was constructed in 1898 by architect Władysław Horodecki for the Kiev City Museum. It was in fact a remake of the talented Moscow architect Petr Boitsov who failed to receive a government license.

The building was originally designed as a museum for the local society of patrons of arts and antique lovers. The facade of the building conveys a neoclassical architecture form – precise reproduction of a six-column porch of Doric order with entablature, triglyphs, metopes and frieze decoration depicting the Triumph of Arts. The architectural composition featuring figures of gryphons and large concrete lions at the top of the stairs were created by an Italian sculptor, Emilio Sala. On the construction of the building was expended 249,000 rubles with only 100,000 paid by the government of Russian Empire. Another 108,000 rubles were paid by the Tereshchenko family who also created the Museum of Western and Oriental Art in Kiev. At first, at the first floor was located exhibition of the Russian archeologist Vikentiy Khvoyka who moved to Kiev from the Kingdom of Bohemia. The museum officially opened just before Christmas on 23 December 1904 as the Kiev Industrial Arts and Science museum of Emperor Nicholas II. The first director of museum became Mykola Biliashivsky.

Represented are Ukrainian artists, both local and those who have moved to other countries and continued their career in the arts. The museum also shows the work of contemporary artists and is recognized around the world as an important representation of art from Eastern Europe. 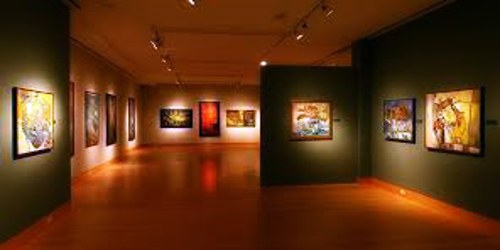 The museum is divided into three sections: old Ukrainian art, 19th- and early-20th-century Ukrainian art, and the Ukrainian ary of the 20th century. After World War I, the museum also served as the Museum of History. One of its most memorable expositions displayed an old trophy tank, which was lent by the Triple Entente to the White Army. After World War II the museum changed its name and its focus back to art. The collection began to grow, with Ukrainian art coming from all areas of Ukraine, and from places like Galicia. The directors obtained Ukrainian art from Moscow and St. Petersburg, as well as from Ukrainian artists living abroad in Europe and America. However, during Joseph Stalin’s repression, this activity ceased, and a large part of the collection was dispersed and hidden.

After Ukrainian independence, the museum reached the status of a major international institution. For the first time, its collections traveled outside of the country and were exhibited in The Netherlands, Canada, France, Denmark, and Croatia.

The museum holds about 40,000 items. The museum building, which was erected in the Neoclassical style in 1897-1900 by Vladyslav Horodetsky and G. Boitsov and decorated by Elia Sal, was enlarged in 1972 so that the exhibition area doubled. The largest section is the one devoted to Soviet art. It contains posters of the revolutionary period; the works done in the 1920s and 1930s by prerevolutionary masters. Today, the museum continues to expand its collection. Some new additions include a unique icon relief of St. George and works by the international Kiev born pioneer of Geometric abstract art Kazimir Malevich.

The current exhibition includes over 20 thousand pieces. Among many are works by a now world-renowned constructivist Vasiliy Yermilov, and Cubo-Futurist Alexander Bogomazov. The Ukrainian side is represented by works of famous Ukrainian and Russian artists such as David Burliuk, Aleksandra Ekster, Vadim Meller, Kliment Red’ko, Solomon Nikritin, Victor Palmov, Maria Sinyakova, Mikhail Boichuk, Mykola Pymonenko, Ilya Shtilman and many others.