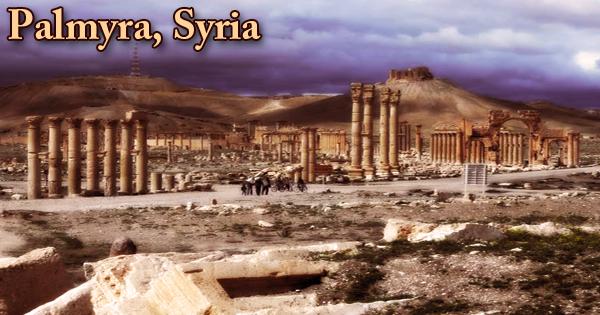 Palmyra (/ˌpælˈmaɪrə/; Palmyrene: “Image of city name written in Palmyrene script” Tadmor; Arabic: تَدْمُر‎ Tadmur) is an ancient Semitic town, founded sometime in the second century BC. The region is currently known as Homs, which is about 200 km north of Damascus, the capital of Syria. In the 1st century CE, the name Palmyra, meaning “city of palm trees,” was granted to the city by its Roman rulers; the pre-Semitic name of the site, Tadmur, Tadmor, or Tudmur, is also still in use. Archaeological findings date back to the Neolithic period, and in the early second millennium BC, the town was first mentioned in records. Prior to becoming a subject of the Roman Empire in the first century AD, Palmyra changed hands on a number of occasions between various empires.

Palmyra was founded on an oasis about halfway between the Mediterranean Sea (west) and the Euphrates River (east) and helped to link Mesopotamia and the East with the Roman world. From trade caravans, the town grew wealthy; the Palmyrenes became popular as merchants who set up colonies along the Silk Road and operated throughout the Roman Empire. The wealth of Palmyra permitted monumental projects, such as the Great Colonnade, the Bel Temple, and the distinctive tombs of the tower, to be constructed. 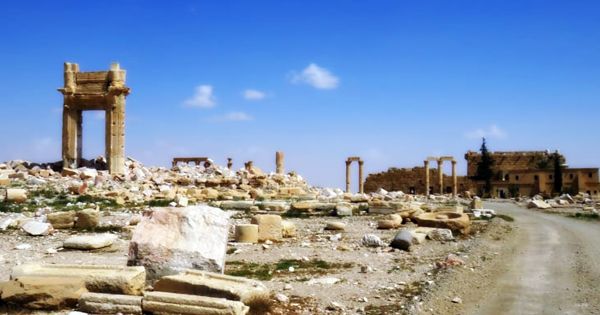 Palmyra, an oasis in the Syrian Desert, north-east of Damascus, is home to the monumental ruins of a great city that was one of the ancient world’s most important cultural centers. Palmyra’s art and architecture, standing at the crossroads of many cultures, married Graeco-Roman techniques with local customs and Persian influences from the 1st to the 2nd centuries. The Palmyrenes, ethnically, mixed elements of the Amorites, Arameans, and Arabs. The social structure of the city was tribal, and Palmyrene (a dialect of Aramaic) was spoken by its inhabitants while using Greek for commercial and diplomatic purposes. The culture of Palmyra, which produced distinctive art and architecture mixing eastern and western styles, was inspired by Greco-Roman culture. Local Semitic deities, Mesopotamian and Arab gods worshipped the city’s inhabitants.

While autonomous for most of its history, by the time of Emperor Tiberius (reigned 14-37 CE), Palmyra came under Roman influence. Emperor Hadrian proclaimed it a civitas libera (“free city”) after visiting the city (c. 129), and it was later given the status of a colony, with tax exemption, by Emperor Caracalla. Palmyra, first mentioned in the archives of Mari in the 2nd millennium BC, was a developed caravan oasis when, as part of the Roman province of Syria, it came under Roman rule in the mid-first century AD.  As a city on the trade route linking Persia, India, and China with the Roman Empire, it grew steadily insignificance, marking the crossroads of many civilizations in the ancient world.

Palmyra became a prosperous regional center in the third century AD. Palmyra enjoyed autonomy prior to AD 273 and was attached to Syria’s Roman province, having its political structure dominated during the first two centuries AD by the Greek city-state model. The city thus prospered, and the great age of Palmyra and its extensive trading activities were in the 2nd and 3rd centuries CE, despite the obstacles that interrupted caravan trade with the East, and also in the face of turmoil around the Mediterranean dominated by the Romans. The Islamic State of Iraq and the Levant (ISIL) demolished significant parts of the ancient city during the Syrian Civil War in 2015, which the Syrian Army recaptured on 2nd March 2017.

The monumental axis of the city forms a grand, colonnaded street of 1100 meters in length, which links the major public monuments including the Temple of Ba’al, Diocletian’s Camp, the Agora, Theatre, other temples and urban quarters together with secondary colonnaded cross streets. The Greek name Παλμύρα (Latinized Palmyra) was first recorded by Pliny the Elder in the 1st century AD. Across the Greco-Roman world, it was used. With rare examples of funerary sculpture, architectural decoration unites the styles of Greco-Roman art with indigenous elements and Persian influences in a strongly original style. The remains of a Roman aqueduct and enormous necropolises are outside the city’s walls. 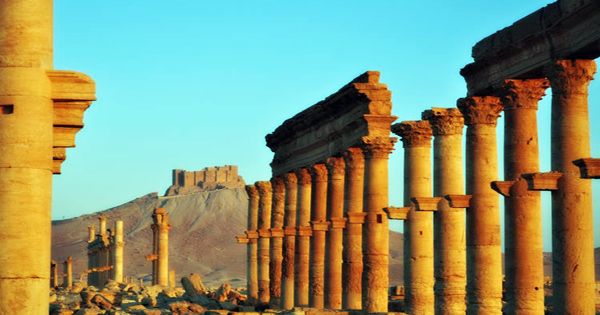 The city of Palmyra lies 215 km (134 mi) northeast of the Syrian capital, Damascus; the city is part of the area known as the Palmyrene, along with an extended hinterland of many villages, farms, and forts. The city overlooks two mountain ranges; the northern mountain belt of Palmyrene from the north and the southern mountains of Palmyrene from the southwest. When the Sāsānians supplanted the Parthians in Persia and southern Mesopotamia (227), the road to the Persian Gulf was soon closed to Palmyrene trade. These difficulties led the Romans, in Palmyra, to establish the personal rule of the Septimius Odaenathus family.

In the 17th and 18th centuries, the discovery of the ruined city by travelers resulted in its subsequent influence on architectural styles. Palmyra opens itself to the Syrian Desert in the south and east. A small wadi (al-Qubur) crosses the area, flowing past the city from the western hills before disappearing into the oasis’s eastern gardens. There is a spring south of the wadi, Efqa. In the 70s AD, Pliny the Elder described the town as famous for its desert location, the richness of its soil, and the surrounding springs, which made it possible for agriculture and herding. The city remained the main station on the Diocletian strata, a paved road that connected Damascus to the Euphrates, but it was taken by Khālid ibn al-Walīd in 634 in the name of Abū Bakr, the first Muslim caliph. After that, as a trading center, its importance gradually declined.

While the city walls originally enclosed an extensive area on both banks of the wadi, only the northern-bank portion was surrounded by the walls restored during Aurelian’s reign. Most of the monumental projects in the city were constructed on the northern bank of the wadi, including the Temple of Bel, which was the site of an earlier temple (known as the Hellenistic temple). Excavation, however, supports the hypothesis that the tell was originally situated on the southern bank, and the wadi was redirected south of the tell to integrate the temple on the north bank into Palmyra’s urban organization of the late first and early second centuries.

The language of Palmyra was Aramaic; a monumental script and a Mesopotamian cursive represent the location of the city between east and west in its two systems of writing. At its height, Palmyra had more than 200,000 inhabitants during the reign of Zenobia. In the early second millennium BC, the earliest known inhabitants were the Amorites, and Arameans were mentioned as inhabiting the region by the end of the millennium. Details on the structure and existence of Palmyra’s trade is uncovered by the great bilingual inscription known as the Tariff of Palmyra and the inscriptions carved below the statues of the great caravan leaders. Via the Persian Gulf road, the Palmyrenees traded goods with India and also with cities such as Coptos on the Nile River, Rome, and Doura-Europus in Syria.

Arabs arrived in the city in the late first millennium BC. Sheikh Zabdibel, who aided the Seleucids in the battle of Raphia (217 BC), was mentioned as the commander of “the Arabs and neighboring tribes to the number of ten thousand”; Zabdibel and his men were not actually identified as Palmyrenes in the texts, but the name “Zabdibel” is a Palmyrene name leading to the conclusion that the sheikh hailed from Palmyra. The ruins at Palmyra clearly show the ancient city’s network strategy. A double portico is ornamented with three nymphaea along the main east-west route, called the Grand Colonnade by archaeologists. The Agora, the House of the Senate, and the Theatre are to the south.

Members of the Palmyrene families took Greek names occasionally and rarely during the Roman period, though ethnic Greeks were few; the majority of people with Greek names, who did not belong to one of the families of the region, were freed, slaves. It seems that the Palmyrenes hated the Greeks, considered them foreigners, and limited their settlement in the town. In architecture, almost all the monuments are marked by the Corinthian order, but the presence of Mesopotamia and Iran is also apparent. Furthermore, art found on monuments and tombs represents the influences of the Roman and Persian empires surrounding them. In 1980, the ruins of the ancient town of Palmyra have declared a UNESCO World Heritage Site.

After its defeat by Timur in 1400, Palmyra declined and was a village of 6,000 inhabitants at the beginning of the 20th century. Palmyra was taken over in May 2015 by the militant party known as the Islamic State in Iraq and the Levant (ISIL). There was significant concern that temples in Palmyra would also be destroyed because ISIL had already demolished and looted ancient sites under its influence. Plans to restore Palmyra have been developed by consultations with UNESCO, UN specialized agencies, archaeological associations, and museums; the work is delayed until the violence in Syria ends, as many international partners fear for the safety of their teams and ensure that the restored artifacts will not be damaged again by further battles. In March 2016, with the help of Russian and Iranian forces, the Syrian army retook Palmyra from ISIL. Following heavy fighting, on 11th December 2016, ISIL briefly reoccupied the city, triggering a Syrian Army offensive that retook the city on 2nd March 2017.