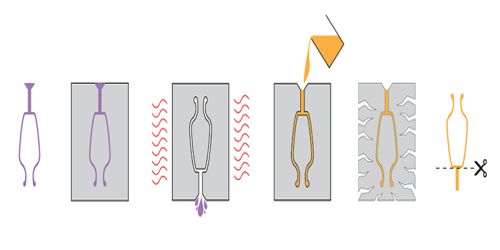 The principal materials for Greek sculpture were stone (especially marble) and bronze – limestone, terracotta and wood being much inferior – and there were several famous examples of ivory carving, notably the chryselephantine statues made by Phidias from gold sheeting and ivory mounted on a wooden core.

Marble, which was used from the beginning, occurs in several places in and around the Aegean, though not in South Italy and Sicily. The Greeks liked white, medium to fine-grained varieties, with much more sparkle than the Carrara (or Luna) later exploited by the Romans and still familiar in the cemeteries of Western Europe. Limestone, which Classical archaeologists often call ‘poras’, is plentiful in most Greek lands and some of it is of very fine quality; it was the commonest stone for statues in the seventh century, but afterwards passed as reputable only for architectural sculpture in places like Sicily, where marble was too expensive. Terracotta too was an economical material for architectural work, particularly antefixes and acroteria. Wood, of course, had little chance of surviving, and to judge by ancient records was never in regular use for finished sculpture, though possibly the molds for bronze statues were formed on wooden figures. Bronze was not important till the second half of the sixth century, when the hammering of sheet metal was replaced by hollow casting, but by the early fifth century it was the preferred medium for most types of free-standing statue (though not for reliefs and architectural sculpture). Chryselephantine statues, which were too expensive and perhaps also too easily damaged to be common, go back at least to the middle years of the sixth century: they were appreciated particularly as cult images in temples. There are other instances, also infrequent, of combinations of materials: some large statues were ‘acrolithie’, that is of stone for the flesh and wood for the other parts, and occasionally the hair of marble statues was completed in stucco. Greek sculpture was coloured, as was most sculpture till the Renaissance, and indeed if the ancient marble statues which were found and admired at that time had kept their paint, the more conservative of us would probably still expect colouring on sculpture. Of the details of the Greek painting of marble, as well as limestone and wood, our information is patchy. For the sixth century, the finds on the Acropolis of Athens give good samples and there are later sarcophagi from Sidon and Etruria where the colours are well preserved, but usually we are lucky if we have traces even of the boundaries of painted areas. On terracotta the paint has survived much better, since it was fired on, but unfortunately because of the firing the range of colours was limited and rather crude. There is the difficulty too that through chemical action some colours may have changed – in particular blues have sometimes turned into greens – and red, which is the most persistent pigment, may sometimes have served as an undercoat. Still one may assert that eyes, hair, lips and nipples were regularly (and cheeks sometimes) painted, that female flesh was left in the natural white of the marble or only tinted lightly, that male flesh was often coloured a warm brown, and that drapery was usually painted over completely unless for a garment was left white for contrast. Generally, until the fourth century, there was a continuous progress towards subtler and more natural colouring, though later it became commoner for hair to be gilded.

With this taste for polychromy it is not surprising that the Greeks were ready to add such accessories as earrings and weapons in metal – how extensively may be judged by the holes drilled for their attachment. The result of all this was to make ancient sculpture much more vivacious, most obviously in giving sight to the eyes. It is harder to calculate the effects in drapery, but sometimes the composition must have been clarified or strengthened by contrasting colour, as on the Nike of Paionios (c.420 BCE), where one thigh was naked and the other covered. On reliefs, the background was painted red or blue, and on pediments, blue. As for bronze, Greek taste preferred to keep it shiny, and patination (green or brown sheen) was a sign of neglect, although in the Roman period some collectors considered patina a certificate of antiquity. Eyes were regularly filled with paste or some other substance, and lips and nipples were often inlaid with copper or silver, but experts still dispute whether hair and other areas were darkened artificially or even painted. So when one looks at Greek sculpture it is worth making the effort to remember that there was more to it than form.