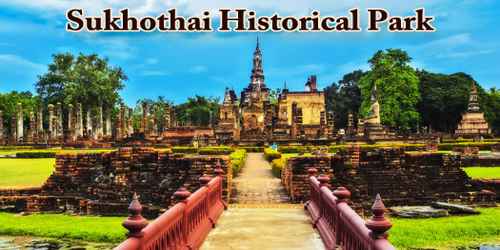 Sukhothai Historical Park (Thai: อุทยานประวัติศาสตร์สุโขทัย), covers an area of about 70sqkm and contains more than 190 historical ruins. It covers the ruins of Sukhothai, literally ‘dawn of happiness’, capital of the Sukhothai Kingdom in the 13th and 14th centuries, in north-central Thailand. It is near the city of Sukhothai, capital of Sukhothai Province.

It is one of Thailand’s most impressive World Heritage Sites. The park includes the remains of 21 historical sites and four large ponds within the old walls. The city’s walls form a rectangle about 2 km (1.2 mi) east-west by 1.6 km (0.99 mi) north-south. There are 193 ruins on 70 km2 (27 sq mi) of land. There is a gate in the centre of each wall. Inside are the remains of the royal palace and twenty-six temples, the largest being Wat Mahathat. The park is maintained by the Fine Arts Department of Thailand with help from UNESCO, which has declared it a World Heritage Site. Each year, the park welcomes thousands of visitors. 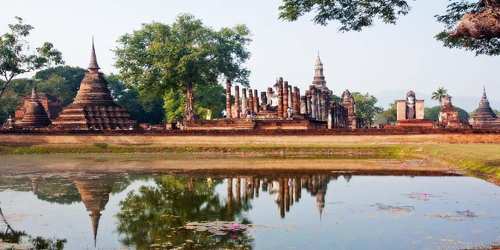 To the city’s immediate north is a small contained area, housing Wat Phra Pai Luang, believed to be the original foundation site of the Sukhothai Kingdom. Early Sukhothai people shared the same beliefs in the system of the universe with the Khmer. Temples were laid out according to the Mount Meru concept with the central prang being the tallest and most significant structure. Only after Theravada Buddhism entered the kingdom did the Ceylonese bell-shaped chedis replace the corn-shaped prangs. Sukhothai craftsmen also developed their own style, known as the lotus-bud chedi. About 60km from Sukhothai Historical Park is its sister city Si Satchanalai, a flourishing centre for trade with China at the time.

Prior to the 13th century, a succession of Tai kingdoms existed in the northern highlands including the Ngoenyang (centered on Chiang Saen, predecessor of Lan Na) kingdom and the Heokam (centered on Chiang Hung, modern Jinghong in China) kingdom of Tai Lue people. Sukhothai had been a trade center and part of Lawo, which was under the domination of the Khmer Empire. The migration of Tai people into the upper Chao Phraya valley was somewhat gradual.

Modern historians believe that the secession of Sukhothai (once known as Sukhodaya) from the Khmer empire began as early as 1180 during the reign of Pho Khun Sri Naw Namthom who was the ruler of Sukhothai and the peripheral city of Sri Satchanalai (modern-day Si Satchanalai District in Sukhothai Province). Sukhothai had enjoyed substantial autonomy until it was re-conquered around 1180 by the Mons of Lawo under Khomsabad Khlonlampong.

As well as in the realms of government and religion, the short-lived Sukhothai Kingdom marked a golden period for art and architecture. King Ramkhamhaeng the Great (1239-1317), the second ruling monarch of the Phra Ruang dynasty, established the Ceylonese school of Theravada Buddhism as the state religion, set up an administrative system and documented Thai alphabets from ancient Khmer scripts. Ceylonese style, bell-shaped stupas grew to become a common sight at Buddhist temples across the kingdom. Sukhothai temple craftsmen also developed their own style, known as the Sukhothai style, the most notable being the ‘lotus-bud’ chedis, brick-over-stucco construction technique and Buddha images with a signature graceful form.

The architecture of Sukhothai temples is most typified by the classic lotus-bud chedi, featuring a conical spire topping a square-sided structure on a three-tiered base. Some sites exhibit other rich architectural forms introduced and modified during the period, such as bell-shaped Sinhalese and double-tiered Srivijaya chedi.

After King Ramkhamhaeng, Sukhothai slowly entered a period of decline, beginning 1378 onwards. After the Battle of Sittaung River in 1583, King Naresuan of Phitsanulok (and crown prince of Ayutthaya) forcibly relocated people from Sukhothai and surrounding areas to the Southern Central plain, due to the war with the Burmese and an earthquake.

The importance of Sukhothai in Thai history cannot be understated. While the kingdom did not last that long in time, at the height of its power, its influence covered an area actually larger than present-day Thailand. To the west its influence reached Pegu and Martaban. To the south, to present-day Nakhon Si Thammarat. To the north, to Luang Prabang (present-day Laos). This influence was not only gained by battlefield conquests but in large part by diplomacy, intermarriage in a pattern of political relationships based on vassals and overlords. Sukhothai, however, was not a state in the present-day meaning of the word. Many parts of the kingdom retained important local power while submitting themselves to Sukhothai. 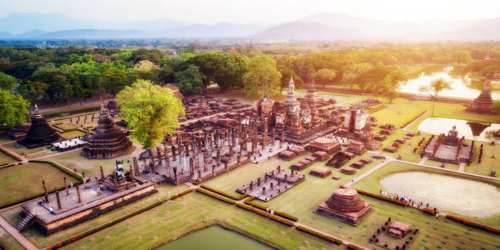 Wat Mahathat: This is the epicentre and spiritual centre of the Sukhothai Kingdom, following the ancient Khmer’s concept of the centre of the universe. The temple architecture, however, is resolutely Sukhothai, with the lotus-bud principal chedi, instead of the Khmer corn-shaped prang, surrounded by smaller bell-shaped chedis built on square bases (Khmer style).  Wat Mahathat is perhaps the most photographed temple in Sukhothai Historical Park, often depicted from its eastern front, with its giant seated Buddha image behind rows of half-collapsed columns.

Wat Phra Pai Luang: Set on the original site where the Sukhothai Kingdom was founded, this temple showcases a combination of Khmer and Lopburi architecture, dating back to the early 13th century, when Sukhothai was undergoing transformations from ancient Khmer-Hinduism to Theravada Buddhism. All but one of the three centrepiece corn-shaped prangs have long collapsed. The prang showcases elaborate stucco decorations, an art unique to Sukhothai’s craftsmen. East of the prangs is the square-based chedi, believed to have served a highly significant spiritual role.

Wat Sri Sawai: Built at about the same time as Wat Phra Pai Luang, Wat Sri Sawai was originally located outside the city wall until the city was moved slightly southwards from the site of Wat Phra Pai Luang. It features heavy Khmer architectural influences, with three corn-shaped prangs but decorative stuccos that are unique to Sukhothai’s craftsmen, e.g. apsaras donning Lopburi-style costumes, floral-designed stucco reliefs and elongated tiers for the prangs. All three prangs are still standing, although some of the details in the decorations may have fallen off.

Wat Sri Chum: Perhaps the second most photographed temple after Wat Mahathat, Wat Sri Chum holds a mystery behind its giant seated Buddha image (15m tall, 11m wide) known as ‘Phra Atjana’, or immovable Buddha, housed inside the sole-standing mandapa. Upon approaching the structure, you see the Buddha’s massive chest and benevolent gaze from the vertical opening just wide enough to allow two persons to enter at a time. The lingering mystery about the temple is the double-layer mandapa walls, which contain a passage that leads up to the Buddha’s head. No one knows what this secret passage was used for. The walls feature the country’s oldest murals, drawn on slate and most of which are no longer visible.

Wat Chetupon: While not much is left standing at this temple, the remains are very impressive. Notable is the gigantic square-based mandapa showcasing stucco-over-brick Buddha images in sitting, standing, walking, and reclining postures. The partially collapsed outer wall surrounding the mandapa, made of extra-thick slate, features pillar-balustrade windows, another architectural highlight unique to this temple.

Wat Trapang Thonglang: This temple boasts three intricate stucco relief images of the Buddha performing three miracles. These reliefs can be found on each side of the outer mandapa wall, the only structure left standing in the temple grounds. Note that much of the relief images have eroded with time.

Wat Saphan Hin: Situated atop a low hill west of the city wall, this temple has a slate-paved pathway that leads to the main temple structure. The 300-metre hike up serves the purpose of a pilgrimage. Much of the main pavilion has collapsed, leaving the 12.5-metre-tall Buddha image in a standing posture, exposed to the elements.

Turiang Kiln: Along the northern outer wall surrounding Wat Phra Pai Luang is the ancient production site of the sangkhalok ware. Fired inside the specially designed cross-draft kilns called ‘Turiang’, sangkhalok ceramic was Sukhothai’s major trade commodity with China. Remnants of the kiln can still be seen at the site.

In July 1988 the historical park was officially opened. On 12 December 1991, it was declared a World Heritage Site as part of the Historic Town of Sukhothai and Associated Historic Towns together with the associated historical parks in Kamphaeng Phet and Si Satchanalai. Sukhothai Historical Park is managed by the Fine Arts Department, Ministry of Culture. The protection of the area was first announced in the Royal Gazette on 6 June 1962. The enabling law is the Act on Ancient Monuments, Antiques, Objects of Art and National Museums, B.E. 2504 (1961) as amended by Act (No. 2), B.E. 2535 (1992).