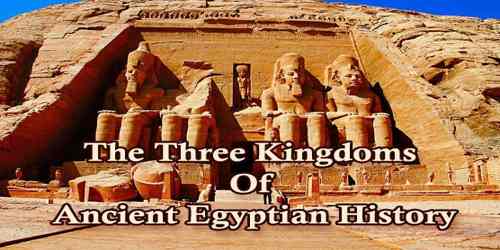 Old Kingdom (2686-2181 BC): The Old Kingdom lasted from 2686 B.C. to 2181 B.C. It included the 3rd through the 6th dynasty. The first pharaoh of the Old Kingdom was Djoser, who ruled Egypt from 2630-2611 B.C. He was responsible for the construction of one of the very first pyramids ever built by the ancient Egyptians. His “step” pyramid at Saqqara started the Egyptian tradition of constructing pyramids as burial places for pharaohs. Major advances in architecture, art, and technology were made during the Old Kingdom, fueled by the increased agricultural productivity and resulting population, made possible by a well-developed central administration. Some of ancient Egypt’s crowning achievements, the Giza pyramids, and Great Sphinx, were constructed during the Old Kingdom. Under the direction of the vizier, state officials collected taxes, coordinated irrigation projects to improve crop yield, drafted peasants to work on construction projects, and established a justice system to maintain peace and order. 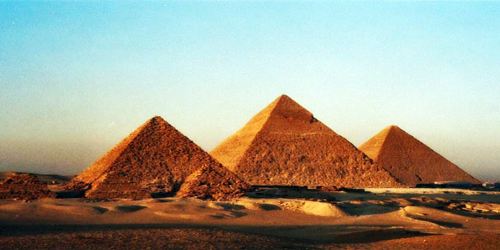 (The Pyramids of Khufu, Khafre and Menkaure)

At that time, Pharaohs had enjoyed the absolute power and they were considered as the representatives of God on the earth. The three great pyramids of Khufu, Menkaura and Khaefra were also built during this period of time. Amongst all the pyramids, the 481 feet tall pyramid of Khufu was the biggest. These great pyramids were built with limestone, the burial chambers were built with granite and the outer castings were carved out of fine limestone. Even today, archaeologists and scientists are unable to discover the actual process of building such great pyramids. It’s surprising that more than two million of stone blocks, each weighing about two and a half tons were used to build such of these great pyramids. The Pharaohs chose Memphis, which was located at the meeting point of the Lower and Upper Egypt, as their capital.

Egypt strengthened its army base to protect herself from the enemies. The trade along with arts, science and literature flourished. During this time period, the pharaohs became wise rulers. Those pharaohs came from Thebes and they brought their local God Amun with them. Amun gained power. People started believing him and began to worship as the king of the Gods. During the Middle Kingdom, the pharaohs were buried inside the hidden tombs instead of expensive pyramids. These intelligently hidden tombs were very hard to discover. 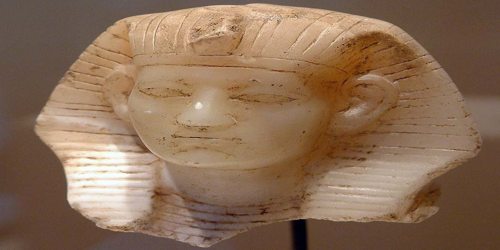 (Amenemhat III, the last great ruler of the Middle Kingdom)

The last great ruler of the Middle Kingdom, Amenemhat III, allowed Semitic-speaking Canaanite settlers from the Near East into the Delta region to provide a sufficient labor force for his especially active mining and building campaigns. These ambitious building and mining activities, however, combined with severe Nile floods later in his reign, strained the economy and precipitated the slow decline into the Second Intermediate Period during the later Thirteenth and Fourteenth dynasties. During this decline, the Canaanite settlers began to assume greater control of the Delta region, eventually coming to power in Egypt as the Hyksos.

New Kingdom (1549-1069 BC): The New Kingdom lasted from about 1550 B.C. to 1070 B.C. and it included the 18th, 19th and 20th dynasties. The First Pharaoh of the New Kingdom and the 18th dynasty was Ahmose. He reigned from 1550-1525 B.C. He successfully drove the Hyksos from Egypt, and also invaded Palestine and advanced into Nubia. He restored temples that had long been neglected and erected chapels in honor of his family. When he died, a prosperous Egypt was left after his reign.

The New Kingdom pharaohs began a large-scale building campaign to promote the god Amun, whose growing cult was based in Karnak. They also constructed monuments to glorify their own achievements, both real and imagined. The Karnak temple is the largest Egyptian temple ever built. 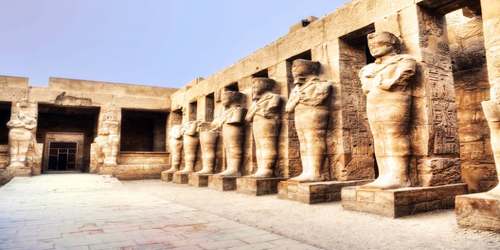 During this kingdom, Egypt expanded its borders. The country was ruled by foreigners called the Hyksos kings. During the New Kingdom, the horse, the chariot and the bronze weapons were introduced as well. The kings were buried in a special geographic region called the Valley of the Kings.