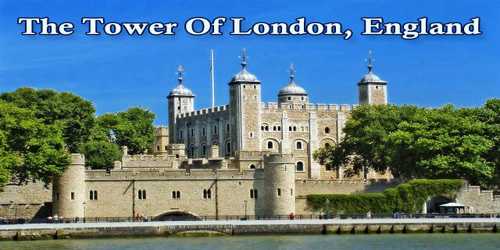 The Tower Of London, England

The Tower of London, officially Her Majesty’s Royal Palace and Fortress of the Tower of London is a 900-year-old castle and fortress in central London that is notable for housing the crown jewels and for holding many famous and infamous prisoners. Its buildings and grounds served historically as a royal palace, a political prison, a place of execution, an arsenal, a royal mint, a menagerie, and a public records office. It is located on the north bank of the River Thames, in the extreme western portion of the borough of Tower Hamlets, on the border with the central City of London. 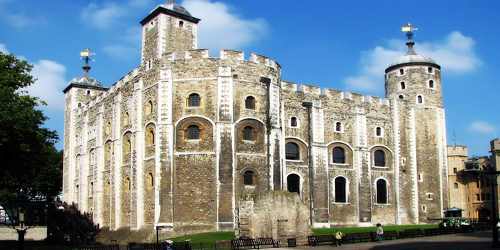 William I the Conqueror created the first fortifications after the conquest of London in A.D. 1066. The Norman invader lacked support among the people of the city and he feared its inhabitants could throw him out. The central keep is known as the “White Tower” was begun about 1078 close inside the old Roman city wall and was built of limestone from Caen in Normandy. During the 12th and 13th centuries, the fortifications were extended beyond the city wall, the White Tower becoming the nucleus of a series of concentric defenses enclosing an inner and an outer ward.

The castle was used as a prison from 1100 (Ranulf Flambard) until 1952 (Kray twins), although that was not its primary purpose. A grand palace early in its history, it served as a royal residence. As a whole, the Tower is a complex of several buildings set within two concentric rings of defensive walls and a moat. There were several phases of expansion, mainly under Kings Richard I, Henry III, and Edward I in the 12th and 13th centuries. The general layout established by the late 13th century remains despite later activity on the site. The last prisoner of note to spend time in the tower was Rudolf Hess, Hitler’s deputy, who fled to Scotland in 1941 and was sent to the tower briefly until he was transferred.

Tower historian Geoffrey Parnell writes in his book “The Tower of London Past & Present” (Sutton Publishing, 1998) that the tower was expanded for about 250 years after William the Conqueror’s time. Today, the complex’s series of buildings and fortifications sprawls over 12 acres (5 hectares).

In the latter half of the 19th century, institutions such as the Royal Mint moved out of the castle to other locations, leaving many buildings empty. Anthony Salvin and John Taylor took the opportunity to restore the Tower to what was felt to be its medieval appearance, clearing out many of the vacant post-medieval structures.

In the First and Second World Wars, the Tower was again used as a prison and witnessed the executions of 12 men for espionage. After the Second World War, damage caused during the Blitz was repaired, and the castle reopened to the public. Today, the Tower of London is one of the country’s most popular tourist attractions. Under the ceremonial charge of the Constable of the Tower, and operated by the Resident Governor of the Tower of London and Keeper of the Jewel House, the property is cared for by the charity Historic Royal Palaces and is protected as a UNESCO World Heritage Site (1988).

The inner “curtain” has 13 towers surrounding the White Tower, of which the best known are the Bloody Tower, the Beauchamp Tower, and the Wakefield Tower. The outer curtain is surrounded by the moat, originally fed by the Thames but drained since 1843. The wall outside the moat has embrasures for cannons; beside them, modern artillery pieces are fired ceremonially on state occasions. The whole complex of buildings covers 18 acres (7 hectares). The only entrance from the land is at the southwest corner, from the City; when the river was still a major highway of London, the 13th-century watergate was much used. Its nickname, Traitors’ Gate, derives from the prisoners brought through it to the Tower, which was long used as a state prison. The armouries that now occupy the White Tower, as well as a later 17th-century brick building alongside, house arms and armour from the early Middle Ages to modern times. Much of this collection, which is administered as the Royal Armouries, was moved to a new museum site in Leeds in 1996.

The White Tower is a keep (also known as a donjon), which was often the strongest structure in a medieval castle, and contained lodgings suitable for the lord in this case, the king or his representative. According to military historian Allen Brown, “The great tower (“White Tower”) was also, by virtue of its strength, majesty and lordly accommodation, the donjon par excellence.” As one of the largest keeps in the Christian world, the White Tower has been described as “the most complete eleventh-century palace in Europe.” 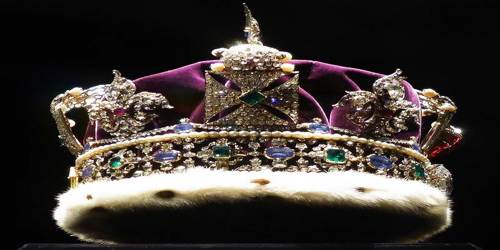 Today, the “Crown Jewels” are one of the most popular attractions at the Tower of London. The jewels include the crowns worn by the monarch at coronation and at the opening of Parliament. Much of the royal regalia were destroyed in the mid-17th century when England became a republic for a brief time. “The oldest piece of the Regalia (surviving today) is the 12th century gold Anointing Spoon, used to anoint the Sovereign with holy oil,” writes a team of researchers on the official Tower of London website. “Apart from the three steel coronation swords (the Swords of Temporal Justice, of Spiritual Justice and of Mercy), this is the only piece that survived the destruction of the pre-Civil War Regalia in 1649-50.”

A military garrison is maintained within the Tower, which with its precincts constitutes a “liberty” outside local jurisdictions. It is held for the sovereign by a constable, who is now always a field marshal. There is a resident governor, who occupies the 16th-century Queen’s House on Tower Green and is in charge of the yeoman warders, or “beefeaters,” as they are popularly called. They still wear a Tudor uniform and live within the Tower, and their responsibilities include guiding tours for the Tower’s two million to three million annual visitors. Ravens with clipped wings are kept on the grounds by the yeoman raven master; a tradition dating from the time of King Charles II (reigned 1660-85) states that, should the ravens leave the Tower, the fortification and the state would fall. By the Tower is Tower Bridge (1894), the only central-city bridge across the Thames below London Bridge.

Today, the Tower of London is one of the most famous castles in the world and is now a World Heritage Site attracting more than 2 million visitors a year. The main threat to the site today is not rebels, foreign armies or falling bombs (bomb damage happened during World War II) but rather the exhaust of cars. It’s a problem that threatens to turn the White Tower into a yellow color, something which none of the previous threats could ever do.

Stories of hauntings and mysterious happenings began with the sighting of Thomas Becket (a martyred saint), who is said to have stymied construction of the palace’s extension from the grave. Anne Boleyn was beheaded in 1536 for treason against Henry VIII; her ghost supposedly haunts the Church of St Peter ad Vincula in the Tower, where she is buried, and has been said to walk around the White Tower carrying her head under her arm. This haunting is commemorated in the 1934 comic song “With Her Head Tucked Underneath Her Arm.” Other reported ghosts include Henry VI, Lady Jane Grey, Margaret Pole, and the Princes in the Tower.

In January 1816, a sentry on guard outside the Jewel House claimed to have witnessed an apparition of a bear advancing towards him, and reportedly died of fright a few days later. In October 1817, a tubular, glowing apparition was claimed to have been seen in the Jewel House by the Keeper of the Crown Jewels, Edmund Lenthal Swifte. He said that the apparition hovered over the shoulder of his wife, leading her to exclaim: “Oh, Christ! It has seized me!” Other nameless and formless terrors have been reported, more recently, by night staff at the Tower.