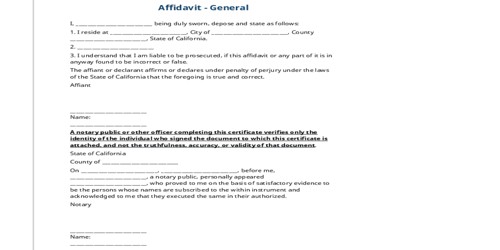 This is a written statement given on oath before a person of authority, such as a magistrate, a notary public, or a solicitor who has been appointed a commissioner for oaths. It is a written statement confirmed by oath or affirmation, for use as evidence in court. Any individual can offer an affidavit as long as they have the mental capacity to understand the seriousness of the oath. When completing an affidavit you must ensure you write your account of the facts of the events exactly as they happened. The document is signed both by the person making the statement, called an affiant, and by a person who is legally authorized to administer an oath, such as a notary public or certain court and government officers.

An affidavit would be used along with witness statements to prove the truthfulness of a certain statement in court.  The most common times in which an individual will be required to use an affidavit is in the following circumstances: Divorce proceedings, Property disputes, Debt cases, etc. If an affidavit is notarized or authenticated, it will also include a caption with a venue and title in reference to judicial proceedings. You will be prompted on their use when the rules of the court require them. However, an affidavit can be a required piece of documentation in any dispute before a court.

When completing an affidavit, you must ensure that you set out your account of the facts/events exactly as they happened. Take care to ensure that you have read the affidavit to ensure that it is correct. If an individual knowingly makes a false affidavit by making a statement which is false, then they can be found to have committed contempt of court.