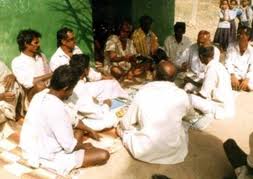 Stricter implementation of the provisions of the Village Courts Act as well as those of the Conciliation ni Disputes (Municipal Areas) Act can greatly reduce the number of filing of cases in the ordinary Court »l lowest jurisdiction, both civil and criminal.

Assistant Judges while trying a suit must scrutinize, inter alia, whether the suit is hit by the provisions of the said two Acts.

2.Naming of the trial institution

If an offence/dispute is tried by Village Courts or Conciliation Board no other court shall have jurisdictii try such case or suit.

4.Areas over which jurisdiction is exercised

Similar is the case with respect to the jurisdiction of a Conciliation Board.

both the Acts it is presumed that neither the Village Court nor the Conciliation Board can try a matter, where they are to award compensation or order payment of money of more than 25.000 taka.

7. Composition of Village Court and Conciliation Board

a) Village Court: Chairman + two members from each of the party to the dispute (where oik
member to be UP member, if possible) =Total member 5.

b)Conciliation Board: Chairman + two members from each of the party to the dispute (where one
member to be Commissioner, if possible) = Total member 5.

The Village Court and the Conciliation Board shall have no pov-ers to pass a sentence of imprisonment or I uk but they can impose fine only in case of willful disobedienc.; to give evidence or to produce document ;is ordered by the Court or the Board.

F’inally decided matter by the Court or the Board shall not be in any other Court.

Awarding of compensation in cases under Part I or ordering payment of money in matters under Part II I to redress the aggrieved person. But the fact of imposing fine is something different. Fine recovered do form part of the funds of the Union Parisad or the Paurashava as the case may be.

The provisions of the Evidence Act, 1872, the Code of Criminal Procedure, 1898 and of the Code of ( nil Procedure, 1908 shall not apply to proceedings before the village Court or the Conciliation Board. Hut Sections 8-1 I of the Oaths Act 1873 shall apply to the said proceedings.

As a part of the continuous efforts to strengthen the local justice services at rural level through ushering the active participation and involvement of media along with other key stakeholders, ‘Activating Village Courts in Bangladesh Project’ organized a Media Workshop titled “Role of Media in activating Village Courts” held on November 22, 2011 at Narail. The project arranged the workshop aiming to avail the local media (print and electronic) getting acquainted about the VCs in endeavors to activate the village courts. The workshop sensitized the journalists in focusing VCs through their respective media in strives of establishing effective village courts at union level. Mr. Md. Jahurul Haque, Deputy Commissioner was present at the workshop as Chief Guest while other high officials attended the workshop. The Deputy Commissioners stated all necessary cooperation in implementing the project activities will be provided by his office. He also said that the local journalists would contribute in advancing village courts being equipped with the knowledge on VCs through the media workshop. Mr. Md. Aktar Uddin, Communication Officer, AVCB, UNDP delivered the key technical presentation at the workshop. The workshop highlighted the issues of village courts in country perspectives, needs and potential of VCs and how media can have effective role in advancing Village Courts. The journalists also took part in group discussions and presented their suggestions on the ways of advancing VCs from the efforts of media. In total 48 journalists of national and local media from the district attended at the workshop.

Training on ‘Monitoring and Evaluation Framework of Village Courts’ held

Activating Village Courts in Bangladesh Project organized a four-day long residential training on Monitoring & Evaluation (M&E) Framework of Village Courts for the Field Team Members from September 18 to 21, 2011 in Chittagong. The project arranged this training aiming to ensure the quality of the field level activities and improve the records keeping of village court proceedings and others procedural documents through effective implementation of M&E system of AVCB Project. A total of 24 participants (from partner NGOs of Chittagong and Khulna Division) attended at the training program

Activating Village Courts in Bangladesh project organized a consultation workshop with BCSAA on Integrating Village Court Issues in their training curricula on September 6, 2011 in Dhaka. The project organized the consultation aiming to integrate the VC issues in the regular training curricula of BCSAA to institutionalize village court issues along with enhancing the institutional capacity of BCSAA on local justice system.

Mr. Fazle Kabir, DG, BCSAA and Secretary to the GoB chaired the Consultation while Mr. Syed Mahboob Hasan, National Project Director, Village Courts Project & Additional Secretary, LGD, MoLGRD&C moderated the event. Mr. Kabir M Ashraf Alam, DG, NILG and Additional Secretary elaborated on the significance and modalities of the integration process.
The consultation identified three regular training courses of BCSAA for integration of VC issues. These courses are ‘Law and administration training course for the Assistant Commissioners and Executive Magistrates (five months)’, ‘Orientation course for fit-listed UNOs (02 weeks)’ and ‘Upazilla administration and development course for UNOs (02 weeks)’. The faculty members of the BCSAA also opined on the extent and duration of the lessons on VC issues at the Consultation.
Mr. Sarder M Asaduzzaman, Project Manager, AVCB welcomed the participants through his initial discussion while Mr. Hamidul Haque Khan, Training Manager, AVCB shared the contents and methods the draft module. Mr. Mahboob Murshed, Legal Expert, AVCB provided valued inputs from legal aspects of village courts at the Consultation.
The DG, BCSAA categorically mentioned the implications of integration and assured to extend all out cooperation in the integration process. Meanwhile, a consultation committee is constituted including the faculty members of BCSAA, representatives from LGD, technical experts of the project and NILG regarding the integration of the VC issues in the training curricula of BCSAA. A total of 25 participants including 05 female members attended at the Consultation.

The Local Government Division introduces award for the best performing Union Parishads (UP) for performing activities in the Village Courts. The 5th Project Implementation Committee (PIC) meeting- held on 24th August at the LGD Ministry announced the award scheme. The meeting was Chaired by Mr. Syed Mahboob Hasan, Additional Secretary of LGD, MoLRG&C and the National Project Director of AVCB Project. The award will be made annually on the basis of the performance of the UP particularly focusing on the number of cases filed, progress, efficiency in functioning village courts, documentation procedure, compliance with Act and Rules, community satisfaction etc.

Mr. Shawkat Ali, MP, Honb’le Deputy Speaker, Bangladesh Parliament graced the consultation as Chief Guest while Dr. Shirin Sharmin Chaudhury, Honb’le State Minister of Women & Children Affairs, Government of Bangladesh and Mr. Stefan Priesner, Country Director, UNDP Bangladesh were present as Special Guests. The Deputy Speaker stressed the need for strengthening and expanding village court across the country in order to help establishing good governance and justice to the poor and underprivileged. The Honb’le State Minister reiterated in her speech to ensure at least one woman member in the constitution of Village Court.

Mr. Stefan Priesner, Country Director, UNDP Bangladesh opined, justice is an essential tool for poverty reduction. Unless there is access to justice at all levels the powerful will always prevail and the poor will always remain poor. Referring few successful case studies, he said, VC can contribute to ensure local justice system and strengthen the status of good governance at local level. The discussants made useful recommendations to improve the draft Bill in amending the Village Courts Act, 2006, making the law more efficient in activating village courts for ensuring justice for the poor and disadvantages people at rural level. The consultation was also attended by senior and mid-level government officers from different ministries and local administration along with impressive presence of judiciary.

Imams and Religious leaders are getting well conversant about village courts

As part of several activities for boosting field level awareness and community mobilization on Village Courts, AVCB Project initiated to train the Imams and religious leaders on VCs at union level in project areas. The project conducts this activity aiming to enhance the knowledge and understanding of religious leaders on village courts as they have immense influence to induce the community at local level escalating their beliefs and support towards the services of VCs. Accordingly, the project started organizing two-day long series of such trainings from May, 2011 and already eight different batches were successfully trained in Dhaka and Rangpur Division. A total of 238 imams and religious leaders attended at these orientation programs while the project targets to cover 3,870 imam & religious leaders at local level within the project areas during the remaining period.

Activating Village Courts in Bangladesh Project organized a Media Workshops on the “Role of Media in Activating Village Courts at Union Level” on June 12, 2011 in Faridpur. The project arranged this workshop aiming to avail the local media (print and electronic) acquainted with the VCs in endeavors to activate the village courts. Mr. Helaluddin Ahmed, Deputy Commissioner, Faridpur was present as Chief Guest while Mr. Md. Awlad Ali Fakir, SP, Faridpur attended as the Special Guest. Among others, Mr. Md. Yusub Ali Mollah, ADC General, Mr. Shafiqur Reza Biswas, Deputy Secretary & ADM, Faridpur participated in the workshop. The workshop highlighted the issues of village courts, need for more VCs and also discussed how the media can play an effective role in advancing VCs at union level. In total 45 journalists of national and local media from the mentioned districts attended at the workshop.

Mr. Syed Mahboob Hasan, the NPD, AVCB project & Additional Secretary, LGD, MoLGRD&C and Mr. Sarder M Asaduzzaman, PM, AVCB observed some field level project activities from May 24 to 26, 2011 in Rangpur. They visited Rajendrapur & Parul Union Parishad under Sadar and Pirgacha Upazila respectively to review the progress of field level activities, record keeping of Village Courts trial, functions of VC, response of community and other stakeholders. They vetted the documents of the VC, and held a discussion with the UP officials, local Chairmen, GoB officials and community during the visit. During their community visit they found that people have developed a keen interest and trusted the activities of village courts.

Training on ‘Monitoring and Evaluation Framework of Village Courts’ held