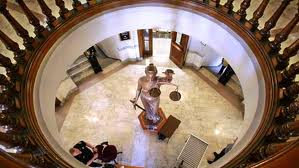 The objective of the chapter is to determine and define the body or other institution which are working for the development of law, for ensuring justice and in any way related with the law of the country especially in the field to co-operate criminal justice system of Bangladesh. Following body or organization are the main to entrust with criminal judicial system of Bangladesh:

The Bangladesh Police is the main law enforcement agency of Bangladesh to provide service to all citizens and make Bangladesh a better and safer place to live and work. It also upholds the rule of law, ensures safety and security of citizens, prevents and detects crime, brings offenders to justice and maintains peace and public order. It is administered by the central interior ministry of the Government of Bangladesh. Outside the Dhaka capital region and other major cities, police is organized at the district and thana levels. Raised in 1976, the Dhaka Metropolitan Police is charged with maintaining security and order in the national capital and largest city. Twelve female police officials were recruited for the Bangladesh Police Special Branch (SB)  in 1974 and inducted in the Dhaka Metropolitan Police in 1978. In 2004, Rapid Action Battalion (RAB) was raised comprising of personnel of the Military of Bangladesh, Border Guard Bangladesh (BGB) and the Bangladesh Ansar and VDP. The Bangladesh Police Special Branch was established to assist in maintaining national security and also performs the functions of intelligence-gathering and counterintelligence. In 2008, Bangladesh police established the Special Women Police Contingent (SWPC) to fight prostitution, drug smuggling and human trafficking. Composing entirely of female officers, the SWPC would be used to gather intelligence on criminal activities and specifically track down female criminals.

Bangladesh judiciary is organized and governed according to the constitutional and legal provisions and from this section enumerate the system and about what ‘judicial independence’ really means. It also elaborates types of judge, including where they sit, the types of cases they hear and how they are appointed. It has been separated and recognized by the constitution as an organ of the state.

How the judiciary is governed:

The Chief Justice of Bangladesh decides where Justices sit, and the type of cases they hear, while the Ministry of Law (MOL) decides the judges, magistrates and tribunals affairs.

In the High court Division the chief Justice constitutes Benches with one or two justices known as Single Bench and Division Bench respectively. In a special case the Chief Justice may constitute Special Bench with Three Justices, called Full Bench or Larger Bench with Five Justices to hear and dispose off a referred case by him. The Chief Justice may withdraw any case from the bench of any Justice without ant assigned reason and transfer it to any other Bench. The chief justice reshuffles the benches of the High Court Division regularly The Ministry of Law (MOL) decides the subordinate  judges, magistrates and tribunals affairs after consultation with the Supreme Court in accordance with the provision of Article 116 of the constitution which runs as follows :

The control (including the power of posting, promotion and grant of leave) and discipline of persons employed in the judicial service and magistrates exercising judicial functions shall vest in the President and shall be exercised by him in consultation with the Supreme Court.

Courts holidays & Vacations: The legal year traditionally begins in October and courts sit for four terms during the year.

Law professional bodies: There are various Advocates Associations and a Bar Council to control the law professionals.
Judicial Training authorities: Training of the subordinate judicial officers is imparted by authority run by the MOL.