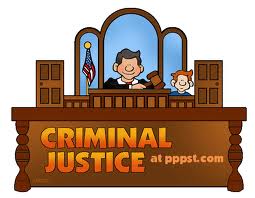 Criminal Justice System and Cause of Crime

Literally crime means an act or omission that constitutes an offense that may be prosecuted by the state and is punishable by law.

The term crime does not, in modern times, have any simple and universally accepted definition, but one definition is that a crime, also called an offence or a criminal offence, is an act harmful not only to some individual, but also to the community or the state (a public wrong). Such acts are forbidden and punishable by law.

The idea that acts like murder, rape and theft are prohibited exists all around the world, and probably has universal moral basis.[4] What precisely is a criminal offence is defined by criminal law of each country. While many have a catalogue of crimes called the criminal code, in some common law countries no such a comprehensive statute exists.

The state (government) has the power to severely restrict one’s liberty for committing a crime. Therefore, in modern societies, a criminal procedure must be adhered to during the investigation and trial. Only if found guilty, the offender may be sentenced to punishment such as community sentence, imprisonment, life imprisonment or, in some jurisdictions, even death.

To be classified as a crime, the act of doing something bad (actus reus) must be usually accompanied by the intention to do something bad (mens rea), with certain exceptions (strict liability).

While every crime violates the law, not every violation of the law counts as a crime. Breaches of private law (torts and breaches of contract) are not automatically punished by the state, but can be enforced through civil procedure.

Thus crime is an unlawful act or omission from doing an act which he is bound to do or under the obligation to do so but acted or omitted.

The word criminal was used first in the 15th century and derived from Late Latin word criminalis .The word literally means A person who has committed a crime.

Thus criminal means a person who committed a crime is the criminal himself for such act.

Criminal justice system is a generic term for the procedure by which criminal conduct is investigated, arrests made, evidence gathered, charges brought, defenses raised, trials conducted, sentences rendered, and punishment carried out.

It also means the system of law enforcement, the bar, the judiciary, corrections, and probation that is directly involved in the apprehension, prosecution, defense, sentencing, incarceration, and supervision of those suspected of or charged with criminal offenses.

The criminal justice system consists of three main parts: (1) Legislative (create laws); (2) adjudication (courts); and (3) corrections (jails, prisons, probation and parole). In the criminal justice system, these distinct agencies operate together both under the rule of law and as the principal means of maintaining the rule of law within society.

Most criminal justice systems have five components-law enforcement, prosecution, defense attorneys, courts, and corrections, each playing a key role in the criminal justice process. The system of law enforcement, the bar, the judiciary, corrections, and probation that is directly involved in the apprehension, prosecution, defense, sentencing, incarceration, and supervision of those suspected of or charged with criminal offenses.

Prosecution: Prosecutors are lawyers who represent the state or federal government (not the victim) throughout the court process-from the first appearance of the accused in court until the accused is acquitted or sentenced. Prosecutors review the evidence brought to them by law enforcement to decide whether to file charges or drop the case. Prosecutors present evidence in court, question witnesses, and decide (at any point after charges have been filed) whether to negotiate plea bargains with defendants. They have great discretion, or freedom, to make choices about how to prosecute the case. Victims may contact the prosecutor’s office to find out which prosecutor is in charge of their case, to inform the prosecutor if the defense attorney has contacted the victim2, and to seek other information about the case.

Courts: Courts are run by judges, whose role is to make sure the law is followed and oversee what happens in court. They decide whether to release offenders before the trial. Judges accept or reject plea agreements, oversee trials, and sentence convicted offenders.

Corrections: Correction officers supervise convicted offenders when they are in jail, in prison, or in the community on probation or parole. In some communities, corrections officers prepare pre-sentencing reports with extensive background information about the offender to help judges decide sentences. The job of corrections officers is to make sure the facilities that hold offenders are secure and safe. They oversee the day-to-day custody of inmates. They also oversee the release processes for inmates and sometimes notify victims of changes in the offender’s status.

Cause found in scientific method:

People are not bad by nature, but sometimes simply too timid to resist the vicious demons that play on their weaknesses and cut their bond with the source of their Power. Humans are good by default, but not everyone is made of steel so as to defend themselves against the demonic forces – destructive emotions and detrimental attitudes: fear, ignorance, hatred, worry, revenge, envy, attachment, greed, lust, selfishness, doubt, prejudice, pride, vanity, impatience, sloth, discrimination, arrogance, ambition, addiction, gluttony, criticism, blame, anxiety, frustration and so on. We all get attacked by those faulty ethereal goblins of our minds and hearts, but most of us succeed to resist them. It’s easy to act on anger, greed, revenge or any of highlighted above, but it takes courage and strength to determine that there is something more important than that.

There are two core reasons why weakness prevails with some:

1) lack of faith, not believing enough in the power of one’s own internal weapons (against inner demons), such as: courage, tolerance, understanding, forgiveness, mercy, honesty, sincerity, integrity, honor, modesty, humbleness, generosity, love, compassion, kindness, detachment, patience, self-discipline, temperance, etc. As a result of not trusting inner resources, there is no enough motivation to develop them and use them. Art Solutions – get the free crime cure; watch inspirational films and read inspirational stories of good qualities conquering the bad ones.

2) Imbalance – most criminals are simply too strong physically, pumping up the body muscles, but not enough the mental and emotional muscles. The reason why their strength becomes weakness is because they are not balanced.
Art Therapy Solutions – get the free artistic crime cure; watch the movie trilogy ‘Samurai’ by legendary Japanese director Hiroshi Inagaki. It tells the story of the greatest Samurai warrior in Japan – Musashi Miyamoto, his journey from being just a tough warrior to a true hero, equally strong on all three accounts: physical skills, mental calmness and emotional state. Watch all three films online here for free. (Titles: Samurai One, Samurai Two, Samurai Three)

Underneath all the weaknesses is a genuine human desire to do well. When we decline ourselves from our source (Higher Power), we find ourselves either in a wrong relationship or in a wrong job, or simply in a wrong place at wrong time, but also in a wrong state of mind – causing us to do the wrong things, on the wrong side of tracks.

Lack of proper education and great role-models causes many to fail to distinguish right from wrong. In most cases offenders don’t think they are doing something wrong, it seems right from their point of view. Poor judgment is also reflected in knowing its wrong, but thinking they could get away with it, not getting caught. Art Therapy Solutions – get the free crime cure.

Lack of love being raised in a dysfunctional family, or coming from a disadvantaged background, or feeling discriminated; none of it alone can cause crime. There are so many others in the world with such conditions, but nevertheless don’t turn to crime. However they cause the lack of love and respect for others. That, endorsed with some other factors, can be a major issue related to crime.

Poverty is often blamed for leading to crime, however underneath is something more vital – society bombards us with commercial values, making us want more and more material things, to the point when some would do anything (including criminal acts) to get them.  Unemployment is another factor in this category that contributes to crime through looking ways to earn money by any means possible. Art Therapy Solutions – get the free crime cure; – find the best powerbroker (presented also here in the top of the right column) to help you out of poverty into wealth.

Deprived neighborhoods economically impoverished neighborhoods breed criminal minds  Solution: if moving out is out of the question, then keep away from the guys in the hood by making yourself busy with putting your new show on the road. Do you have the strength to distance yourself from the harmful influences of your neighbors? If not, find the strength from the power behind your new thing, which you can discover in the illustrated guide ‘Jump’.

 Poor parenting skills erratic or harsh discipline, lack of parental control, supervision and monitoring,  parental conflict,  family dysfunction/breakdown, criminal, anti-social and or alcoholic parent/s Read more about it from BBC indoor. The Independent Father lessens is also one of underestimated cause of crime. Read more about it by clicking here. Consider these facts:

 Ecological it has long been known by police officers that cold winter nights keep criminals off the streets and crime levels down. Crime scientists speculate that one of the hidden consequences of global warming will be an increase in street crime during mild winters. Studies have suggested that warmer temperatures boost aggression hormones such as epinephrine and testosterone.

 Fraudulent Supreme Court rulings Defective court rulings are one cause of the extra crimes.

American FBI has devised a list of the factors which contribute to crime. Source: Bureau’s “Uniform Crime Report”: