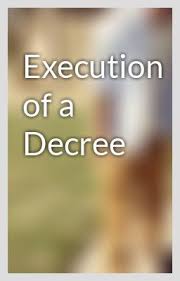 The term “Execution” has not been defined in the code. Execution is the enforcement of a decree by a judicial process which enables the decree-holder to realise the fruits of the decree and judgment passed by the competent Court in his favour. The execution is complete when the judgment-creditor or decree-holder gets money or other thing awarded to him by the judgment, decree or order of the Court. Order XXI of the CPC which is the longest Order provides detailed provisions for making an application for execution and how they are to be entertained, dealt with and decided.

Which Court may Execution a Decree?

Application for Execution of decree

# Modes of Execution of decree

11. Delivery of any Property

16. Payment of coins or currency notes

# Properties which are liable for attachment or sale & which are not?

The following properties are liable to attachment and sale in execution of a decree, namely:

11. Bonds or other securities for money

13. Shares in corporation and

14. All other saleable property movable or immovable

The following properties are not liable to attachment and sale in execution of a decree, namely:

10. An agriculturist or a labourer or a domestic servant

11. An agriculturist occupied by him

A mere right to sue for damages;

Any right of personal service;

12. Stipends and gratuities allowed to pensioners of the government or payable out of any service family pension fund notified in the Official Gazette by the Government in this behalf, and political pension.

13. The wages of labourers and domestic servants, whether payable in money or in kind.

14. Salary to the extent of the first hundred Taka and one half the remainders. [Provided that where Such salary is the salary of a servant of the Republic or a servant of the Railway of local authority, and the whole of a part of the portion of such salary liable to attachment has been under attachment, whether continuously or intermittently, for a total period of twenty-four months, such portion shall be exempt from attachment until the expiry of a further period of twelve months, and, where such attachment has been made in execution of one and the same decree, shall, be finally exempt from attachment in execution of that decree.]

16. all compulsory deposits and other sums in or derived from any fund to which the Providend Funds Act, 1925, for the time being applies in so far as they are declared by the said Act not to be liable to attachment

18. An expectancy of succession by survivorship or other merely contingent or possible right or interest

19. A right to future maintenance

20. Any allowance declared by any Bangladesh law to be exempt from liability to attachment or sale in execution of a decree; and,

21. Where a judgment-debtor is a person liable for the payment of land-revenue, any movable property which, under any law for the time being applicable to him, is exempt from sale for the recovery of an arrear of such revenue.