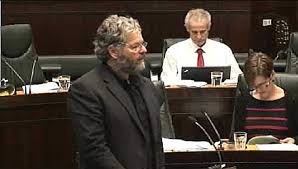 In politics, the term ‘crossing the floor’ can mean either to vote against party lines, especially where this is considered unusual or controversial, or to describe a member who leaves their party entirely and joins the opposite side of the House, such as leaving an opposition party to support the government (or vice versa), or even leaving one opposition party to join another.[1] In Canada, for example, the term ‘crossing the floor’ is used exclusively to refer to switching parties, which occurs occasionally at both the federal and provincial levels.

For many reasons, floor crossing is regarded as being controversial. From the voter’s perspective, the political party is a team of candidates at election time. When voters chose candidates for public office, they delegate decision-making on public policy to political parties and to party-identified representatives. Repeated elections give voters the opportunity to hold parties responsible and accountable for policy decisions and outcomes. Thus, it is argued, that it would seem reasonable to expect parliamentarians to stick to the party labels under which they won the election.[2] Mershon & Heller note that in many democracies this expectation is upheld. For example, in the United States only 20 members of the United States House and Senate changed party affiliation between 1947 and 1997. Similarly, floor crossing is rare in the established parliamentary democracies of Western Europe (for example, Germany). In some settings, however, floor crossing during a legislative term is not uncommon (for example, Brazil).

In broader sense, the term “floor crossing” refers to voting against one’s own party in the House or parliament during the time of voting. Not only that floor crossing also says that if one member is not present at the time of voting or passing a bill or doesn’t take part in the voting the member will lose his membership or seat from the parliament. This term “floor crossing” can also be called “political defection” or “side swapping”.

So, this law basically takes away the freedom or liberty of the ministers chosen by the people. Even if anyone wants to protest against a decision of his own party there is no option to do it. This law is found in countries like India, Pakistan, Bangladesh, Nepal, Sri Lanka, Malaysia etc.

In Bangladesh in the year 1972 our constitution makers incorporated Article 70 which is designed to prevent floor crossing in the parliament. This was an anti-defection or anti floor crossing law.[3]

This law basically blocs the development of the parliamentary government. The main spirit of the parliamentary government is that the government is accountable or responsible to the legislature. So, the executive is always not sure whether he is going to be supported or not and therefore it always tries to feel the pulse of the members or tries to be more responsive. But, under the anti defection or anti floor crossing law the government and the executive is in a position from where they can practice dictatorship, as there is none from the government to protest or vote against. So, the government as it is not going to be accountable to any of the members or legislature it can pass any unethical bill which can be detrimental to the country and there is none to protest or vote against.

But, we need to know the reason behind designing this law in the constitution of Bangladesh in 1972. In this essay, the background of this law, the Article 70 law, its drawbacks and the reality of Bangladesh politics and some recommendations will be discussed in brief.

History of Floor Crossing in Bangladesh:

If we look at the political defection or floor crossing in the then East Pakistan then we will know the reason behind the Article 70 or anti floor crossing law. Before the liberation war when Bangladesh was used to be a state of the then Pakistan we can see that members were used to cross the floor for their own interest. The lack of wisdom, illiteracy and politically unconscious people has actually crossed the floor. They were selfish in nature and never thought of the good of the parliament, instead they took the advantage of floor crossing and made such a situation which stopped the actual flow of parliament. Whenever something happened in the party which has hurt someone’s own interest he was used to cross the floor. It was a regular practice in the then Pakistan. This practice made the parliamentary system unworkable here. [4]

In the year 1954 United Front has won the election and formed government. But due to political defection the United Front was broken into pieces and the Awami League (AL) was created and became the opposition of United Front. In the year 1956 when United Front had to resign AL formed government both at center and the province of Pakistan. But, again due to disagreements in foreign policy between Suhrawardy and Moulana Abdul Hamid Khan Bhashani AL was divided and Bhshani came out of AL and joined NAP. Then Abu Hossain of United Front again formed a government which was in power for only a few hours. After Abu Hossain again AL came into power and was there for three months only. This chaos continued and it ended with the death of the then deputy speaker in the year 1958. The parliamentary government dies in the then Eat Pakistan with this. From 1958 October 7 Military government got the hold over the then East Pakistan.[5]

The lack of cohesion and lack of unity among the members of the parties were the result of personal interest, conflict of interest, personal favor etc. Some members did not attend party meetings because lack of power. The floor crossing took place even because someone’s corrupted relatives were punished or not given any good job. There are hundreds of examples of such instance. For example-

1.One member’s name was not included in the local relief committee so in order to take revenge he defected or crossed the floor.

2.Money for flood affected people was sent in the name of a school secretary and not in the name of the member of the locality, so a defection or floor crossing took place.[7]

3.Some of the members crossed floors or did not attend part meetings out of whim.

4.One member felt that he is not getting enough attention in the House, so he defected or crossed the floor.

5.A member failed to influence the authority for her husband’s job and was absent from the parliament.

6.A member was caught due to black marketing and he looked for help from the Chief Minister. When he did not get the assistance, he crossed the floor or defected.[8]

There are other examples as well.

The coalitions and disagreements in between the year 1954-1958 and the selfish nature of the members actually made a strong base for the Article 70 of 1972.