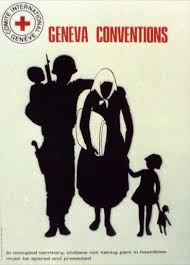 The Geneva Conventions comprise four treaties, and 3 extra protocols, that establish the standards of jurisprudence for the humanitarian treatment of war. The singular term convention typically denotes the agreements of 1949, negotiated within the aftermath of the Second war (1939–45), that updated the terms of the primary 3 treaties  and else a fourth. The Geneva Conventions extensively outlined the essential rights of period of time prisoners; established protections for the wounded; and established protections for the civilians in and around a war-zone.