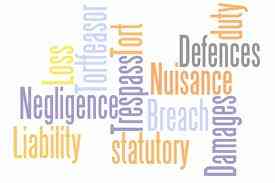 This maxim means damage without Infringement of any legal right injury. By damnun is meant damage in the substantial sense of money, loss of comfort, service, health, or the like. By injuria it means a tortious act it needs not to be willful and malicious. There are many acts which though harmful are not wrongful and give no right of action to him who suffers from their affects. Damage so done and suffered is called dam nun Sine Injuries. Damage without breach of a legal right will not constitute a tort. They are instances of damage suffered from justification acts.

Where it had been held that the plaintiff a school master had no right to complain the opening of a new school. The damage suffered was mere damnun absque Injury or damage without injury.

Damage done by competition in trade is not actionable.

This maxim means that whenever there is an invasion of a legal right the person in whom the right is vested is entitled to bring an action and may recover damage although he has suffered no actual harm. It can be said as infringement of legal rights without Damage.

The defendant a returning officer wrongfully refused to register a duly tendered vote of the plaintiff, who was legally a qualified voter. The candidate for whom the vote was sought to be tendered was elected and no loss was suffered by the plaintiff’s vote. Held that never the less an action lay. The action was allowed on the ground that the violation of the plaintiff’s statutory right was actionable without proof of pecuniary damage.

There are cases in which an act is actionable as a tort although it has been the cause of no damage at all.

The malice is used in two quite different senses in the law of torts. (i) in its ordinary sense it means ill-will, spite, hatred, evil motive, etc. Such malice is called express malice or actual malice or malice in fact.

(ii) Malice in law means a wrongful act done intentionally without just cause or excuse. Bad will or intention is Malice.

J. Bayley: “Malice in common acceptation means ill will against a person but in its legal sense it means wrongful act done intentionally without just cause or excuse.”

Motive has been described as ulterior intent. Motive means will of doing something. In case of tort motives are irrelevant.

Winfield: “Intention signifies full advertence in the mind of the defendant to his conduct which is in question and to its consequence together with a desire for those consequences.”

Example: When I through a stone at you with the desire that it should hit you and accordingly it hits you. I have intentionally thrown the stone upon you. Desire of particular consequence.

Such Cases- Natural consequence of your act.

First sense, it is a mental condition and Secondly, Nature of specific tort. Negligence may sometime mean Carelessness. Negligence is the breach of a legal duty to take care which results in damage, undesired by the defendant to the plaintiff. In the modern law of tort the word negligence has two meanings;

1. What Law does not permit? Malfeasance is the commission of an unlawful act, for example trespass.

2. Misfeasance is the improper performance of some lawful act. What is just but done unjustly (reading in library).

3. Nonfeasance means failing to perform an obligatory act. What is yours legal duty- If you fail to perform that (Primary school books).

Fault: Sir John Salmon was of the view that liability should always be based on fault. A man should be held liable for a wrongful act only if he has done it either intentionally or with culpable negligence. There is no justice in making a may, pay a certain amount to the injured party if the act of injury was unintentional or accidental.

But today the view is difference. It is not now regarded as essential for tortuous liability.

Defenses to an action in tort:

“If, in the prosecution of a lawful act, a casualty purely accidental arises, no action can be supported for an injury arising there from.”

“To make an accident, or casualty, or as the law sometimes states it, inevitable accident, it must be such an accident as the defendant could not have avoided by the use of [due care].”

There are seven different modes in which a tort could be discharged that is to say the remedy ceases to operate. Where there is a vested right of action may be discharged by seven methods. These are: