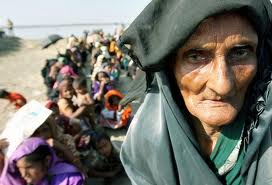 Plight of Women in Bangladesh

Bangladesh Human Rights Commission is a voluntary Organisation. It was established in the year 1987. It is an affiliated member of OMCT, International Commission of Jurists, and International Association of American Minorities. It also has accredited status with the UNO. BHRC is the largest Human Rights Organization in Bangladesh. It deals with various activities to up keep Human Rights situation.

Bangladesh is a Country with a population of about 140 million. The per capita income is about 363 Dollars. But more than 50% people live below poverty line.
The women are considered 2nd class citizens. Though various laws and Acts have been made to protect them, they are easy prey to persecution, torture and injustice.

The injustice is imposed socially and by religion.

Social Injustice
The birth of a female child is rarely considered a happy incident. If a woman cannot have a male child, usually the husband remarries.

The female child is also given less priority. They are given less love and affection by the family and the relatives.

Female child is usually offered less nutritious food, less money is spent on their education. They are more abused and rebuked. They have to do large part of the household work.

Women Trafficking
Thus we see that the women are victims of social & religious injustice. They are brought up in an environment of unfriendliness. Then again, the women fall prey to kidnapping. They are kidnapped and sold to different brothels. They are also trafficked illegally to other country like India, Pakistan and Middle East. Several type of such trafficking is there.

Mr.Chairman, Bangladesh has a well-developed set of National laws. In addition to its Penal code, Bangladesh has passed some other laws to address specific needs of women in the country. So far the willingness of the Government and also the opinion of the members of the legislature is concerned, the women are well cared for and actions are ” Meant ” to be taken to reduce cruelty to women.

But in reality everything is meaningless. The following is a narration of the reason. The legal procedure in Bangladesh is very lengthy. At first a crime is to be reported to the local police station. About 95% police officers are thoroughly corrupt. The women usually cannot pay any bribe. And actually they are the victims so question of paying bribe does not arise at all.

Again after a sentence is passed in the lower court it goes to the session. Judge court and then to the high court and ultimately to the Supreme Court. The process takes in excess of 2 to 3 years at the least. 90% plight of women or their families can not bear the cost of the lengthy legal procedure.

The perpetrators usually remain at large on bail & persecute the victims and their family to withdraw the case. Sometimes they burn their houses or even kill or injure other members of the family. Till now we have more than 1000 acid victims cases and only in 13 cases sentences have been passed. These too are in the lower courts only. So where comes the justice ? How can we prevent cruelty to the women? Should we wait for the perpetrators to throw acids on women and we shall treat them only? No!! The perpetrators must be brought to justice so that the crime in itself is lowered and we have less case to deal with.

As if all these are not enough. It is a shameful thing to say that even many judicial members are corrupt and sometimes the judgement can be bought.
So in order to prevent the women from suffering and falling prey to the Acid Burn, the legal procedure must be effective.

BHRC proposed to the Government to set up Special Tribunals which may be headed by a judge of the High Court and the Judgement passed may only be appealed to the Supreme Court. If such Tribunals are made the criminals can be brought to justice.

BHRC appeals to the International Community to put all its power to persuade the Government of Bangladesh to take up effective measures to give justice to the suffering thousands. Hundreds of young women in Bangladesh are being attacked with Acids. At least 20 cases of Acid Burn occur every month & the victims are almost always women & children.

Sulfuric acid is the commonest acid used. It melts away skin & muscle; often to the bone. Steps are being taken to restrict the selling of acid but it is virtually impossible, as it is a common requirement in the Battery repair shop and Tannery industries.

Acid throwing increased about 7 years ago and coincided with a new thrust by women in Bangladesh to assert their rights. With the help of the “Micro-Credit” programme started by various NGO’s there have been uplifts in the condition of the women. They have grown self honour and independence and refuse to be a commodity in the hand of the father or the husband. It may be reasoned that Acid throwing is a tragic by product of a gender revolution.

Again, 80% of the female if arrested by the police for various reasons, fall prey to the carnal desire of the Police officers. Last year 16 such cases were reported.
Bangladesh Human Rights Commission has taken up the matter of Acid Burn very seriously. In case of Acid Burn victims, as soon as a case is reported, the local members of the organisation goes to the family of the victim. They give them psychological support, take up the matter to the police, provide initial medical treatment by the local doctors & ultimately bring the victim to Dhaka. The Organisation has a hospital there in Dhaka where the victim is treated by Surgeons, Plastic Surgeons, Ophthalmologist & other relevant specialists.

BHRC does the necessary follow up with the local police station. The police officers are deterred to the recourse of corruption. Presently BHRC is giving legal assistance to about 200 Acid Burn cases and is giving medical aid to about 60 victims.

BHRC has given legal aid to some women who were trafficked out of the country. About 123 women were found in India who were brought back to Bangladesh.
About 6000 women were trafficked out of border every year. The task of recovering them, bringing them home and rehabilitate them is a mammoth task.
All conscious people of the world must work side by side to help out these poor victims.

As per article 28 of our constitution, it is obligatory for the state to make provisions for betterment of the women and children and the neglected section of the society. Under Article 25 (6), Universal Declaration of Human Rights, every child is entitled to special care, treatment, social security whether born of wed lock or not. Again under UN convection on the Rights of children, the state is responsible for sound upbringing of children. The convention enjoins principally the ways that adults and governments must adopt to protect the children, support their health, education and development. It also includes the right to have home, food and also right to protection from abuse and neglect.

But in our country the girl child remains neglected, undesired in the family and unwanted in the society. Once upon a time the girl child was buried alive. The lives of many female children are shattered by extreme poverty and discrimination in terms of facilities and social protection.

We have no birth registration system. as a result a large number of female children, teen-aged girls, women are trafficked within the territory and out of border. The same reason complicate their rescue, release and repatriation. And even after their rescue and repatriation, their reintegration in the society and family is for more difficult due to social taboos and brutal customs.
Prostitution is an immoral act. It is very degrading. The extent of suffering can only be understood by the victim. More than 25% girls working in different brothels are under the age of 18 years. 95% of those girls are trafficked under the age of 18 and about 25% are under the age of 12. In the World Summit for children in 1990, governments pledged to give every child a better life and promising future. They signed the World Declaration on the survival, protection and development of children and a plan of Action for implementing the World Declaration.

As BHRC is a powerful organisation with powerful men in it, the perpetrators of crimes against women are more aware and careful than before. They know that there will be BHRC against any victim and thus the victims are now-a-days not an easy prey. As I told you before, this sort of crime is usually committed against the poor as they have limited resources to fight back, with the help of BHRC, now-a-days the victims are no more women of the poor sect. BHRC never let go a crime unchallenged. If the legal proceedings would have been shortened and the criminals were duly punished, the incidence of this and other barbarian crimes committed against women, would be greatly reduced.

People form all walks of life must come forward to help fulfill the World Declaration. Only observance of World Children Day etc. will not solve the problem but the all out effort of the Government and people and the help of the Developed Countries will ensure the well-being of the destitute children of LDCs.

I, on behalf of Bangladesh Human Rights Commission like to implore upon the International Community to come forward & strengthen the hands of BHRC with the help of other Human Rights Activities, in home and aboard, we are positive that good result will definitely be obtained.

Ladies and gentlemen, I take the pleasure to thank Mr. Saiful Islam Dildar, Secretary General, BHRC to give me a chance to present the woeful condition of the women in my country. And thank you all present here for giving a patient hearing.
Please excuse me if I have become emotional or rhetorical.