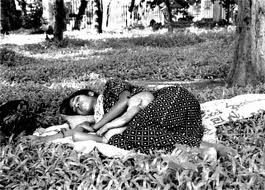 The people of Bangladesh have a deep-rooted awareness of human rights and fundamental freedom borne of the experience accompanying the nation’s birth. This was again demonstrated in the struggle of the people of Bangladesh and their heroic sacrifice for the restoration of democracy by uprooting a+ deeply entrenched autocratic regime in December 1990.
The challenge before Bangladesh is to keep pace with rising expectations of people along a broad and complex range of fronts that mark the indivisibility of human rights. Therefore, Bangladesh reaffirms that right to development as established in the declaration on the right to development as a universal and inalienable right and an integral part of the fundamental human rights.
Bangladesh considers that hunger, poverty, illiteracy which characterize underdevelopment to be formidable impediments, which frustrate the effective enjoyment of human rights. Removal of these impediments through mutual co-operation is, therefore, vital for the full realization of the aims and objectives of the Universal Declaration of the Human Rights. Bangladesh is pleased to note that the Vienna Declaration adopted in June 1993 at the conclusion of the World Conference on Human Rights highlighted the universal character and the indivisibility of human rights as well as reiterated the fact that existence of extreme poverty inhibits the full and effective enjoyment of human rights and that its immediate alleviation and eventual elimination must remain a high priority for the international community.
Bangladesh pledged its total commitment and unwavering support to the United Nations for its continuing efforts in promoting dignity and worth of the human person and for full realization of the principles enshrined in the Universal Declaration of Human Rights.
Parliament in Bangladesh is sovereign and democratic polity is being given a permanent shape through institution building.

The administration has been made transparent and accountable, the press enjoys full freedom and the judiciary has been made independent.
The concept of human rights and gender equality is enshrined in the constitution of Bangladesh which, inter alia, guarantees equality of women in all spheres of state and public life. The government recognizes the equality of women as a principle of state policy and is fully aware of the importance and dignity of women in the overall development of the society. Keeping this in view, the government of Bangladesh has not only taken up various action programmes, but has also brought about legislative changes to give an institutional shape to the rights and the role of women in the national life of Bangladesh. In pursuance of this firm commitment, Bangladesh has to date, acceded to Nine International Instruments partaining to human rights, including the Convention on Elimination of All Forms of Discrimination against Women and the Convention on the Rights of the Children. In fact, Bangladesh is one of the first 20 ratifying states to the Convention on the Rights of the Children and also is a signatory to the UN Declaration of the World Summit on Children. As a follow-up action of the Summit Declaration, Bangladesh-UNICEF Advisory Group has already completed a National Plan of Action for child survival, development and
protection. Bangladesh’s commitment and active involvement in ameliorating the condition of women bear recognition in its election to such international bodies as the Commission on Elimination of Discrimination against Women, Commission on tre Status of Women and the Board of Trustees of the International Research and Training Institute for the Advancement of Women. Quota system for women has been introduced with regard to employment in government and semi-government offices.
A policy decision has been taken at the highest level of the government to ensure women their rightful share in the society. There are 30 reserved seats for women in national parliament and quotas have been fixed for them in government jobs. Stringent laws have been enacted to protect women from social evils and to ensure their rights. Steps have also been taken for the economic empowerment of women.
On the question of the rights of minorities and communal harmony it can be said that Bangladesh is regarded as model in this regard in the region. The government and the people have ensured complete communal harmony in the country

Human rights are rights inherent to all human beings, whatever our nationality, place of rex ilence, sex, national or ethnic origin, color, religion, language, or any other status. We are all equally entitled to our human rights without discrimination. These rights are all interrelated, interdependent, and indivisible.

All States have ratified at least one, and 80% of States have ratified four or more, of the core human rights treaties, reflecting consent of States which creates legal obligations for them and giving concrete expression to universality. Some fundamental human rights norms enjoy universal protection by customary international law across all boundaries and civilizations.

Human rights are inalienable. They should not be taken away, except in specific situations and according to due process. For example, the right to liberty may be restricted if a person is found guilty of a crime by a court of law.

The principle applies to everyone in relation to all human rights and freedoms and it prohibits discrimination on the basis of a list of non-exhaustive categories such as sex, race, colour and so on. The principle of non-discrimination is complemented by the principle of equality, as stated in Article 1 of the Universal Declaration of Human Rights: “All human beings are born free and equal in dignity and rights.”

Both Rights and Obligations

Human rights are expressions of basic human values that societies have sought to protect from abuse and exploitation. Throughout history, for ethical, cultural, legal, political, and other reasons, diverse societies have affirmed the human and labor rights of individuals.

To codify such rights and values globally, the United Nations and the International Labour Organization (ILO) — a sister U.N. agency that promotes international labor standards — developed two important declarations on human and labor rights for all member states to adopt. These declarations include Universal Declaration of Human Rights (UDHR) as well as the Declaration on Fundamental Principles and Rights at Work (DFPRW).

In addition to defining civil, political and economic rights, these important documents have helped to define which labor rights need protection by governments and other members of society. Such labor and human rights include the right to be compensated in accordance with applicable laws or, in the absence of applicable laws, in accordance with local industry standard; the right to be protected from unsafe working conditions; the right to be protected from forced, indentured or exploitative employment; and the right to work in an environment free from harassment and discrimination.

Apart from the different development co-operation sectoral programmes, we are attaches great importance to the improvement of the human rights situation in Bangladesh. Poor people are the most vulnerable to all forms of violation of human rights. Strengthening of the formal justice system is necessary to develop the capacity to ensure safety, security and access to justice for all. we will give special attention to vulnerable groups in society like detainees or land-less people.

we are continues its support to selected organisations that contribute effectively to awareness raising, empowerment and legal training on human rights issues in Bangladesh. The Bangladesh Bar Council has received Dutch funding for its human rights training programme for young lawyers.

Article 21 of the Universal Declaration of Human Rights stipulates the right to vote and to be elected ‘at periodic and genuine elections, which shall be by universal and equal suffrage’ and shall be held by secret ballot or by equivalent free voting procedures, guaranteeing the free expression of the will of the electors. We are believes that election monitors can make important contributions to the credibility of the upcoming elections in Bangladesh. Therefore it financially supports the Fair Election Monitoring Alliance (FEMA) in its effort to deploy 70,000 local non-partisan observers at polling stations throughout the country.

We will follow the developments in and with respect to the Chittagong Hill Tracts and investigate possible ways and means to contribute to a promising implementation of the Peace Accord of 1997. Some funding of activities in the framework of the sector programmes under the bilateral co-operation programme or in the field of human rights is not excluded.

A corruption free, transparent and accountable government is a vital requirement for the sustainable development of any country. Being the host of the international anti-corruption forum in The Hague in May 2001, clearly demonstrated the importance we are attaches to this issue. We are currently supports Transparency International Bangladesh, a prominent anti-corruption organisation, in its effort to involve citizens in the fight for curbing corruption. However, without addressing the shortcomings in the financial management of the government itself no improvement in ‘good governance’ will be achieved. Therefore the considers co-funding the programme of the ministry of Finance with DFID funding: ‘Reforms in Budgeting and Expenditure Control’. Moreover, the  supports a UNDP project aimed at improving the working methods of the parliament and the democratic process

Human Rights since 70s have been elevated to a matter of international rather than a national concern. All international instruments require states’ domestic systems to provide adequate redress for those whose rights have been violated.

It is only when those states’ own system falters or where it is non-existent, international mechanism for securing human rights come into play. There is a symbiotic relationship between national and international systems.

Although certain fundamental human rights are justifiable by the Supreme Court in Bangladesh by virtue of Article 102 of the Constitution, the setting up of HRC is complementary to the powers of the Supreme Court.

Other functions of HRC

Among other functions of HRC, there are three central functions, (a) investigation into violation of human rights, (b) public inquiry into human rights situations, such as homeless children or slum dwellers, (c) education, publicity and research.