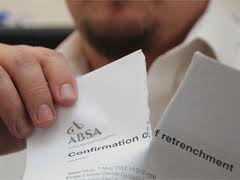 Conditions for a valid Retrenchment

According to section 20 read with section 2(11) the conditions of a valid retrenchment are as follows:

The workers to be retrenchment must be given one month’s notice;

The notice must be given in writing;

the notice must be contain reasons for retrenchment;

alternative to condition (2) above, instead of giving one months, a worker may be retrenched instantly by giving him payment of wages for the period of notice;

a copy of the notice of retrenchment must be send to the chief inspector;

a copy of the notice must be send to the CBA;

there must be termination of services of a workman on the ground of redundancy or surplus labour;

Section 20 of the code incorporates the well recognized principle of retrenchment in industrial law1, namely, the “last come first go” or “first come last go”. The principal laid down in section 20 for retrenchment procedure are to be adhered to by every employer. The conditions which this section prescribes for the procedure of retrenchment are as follows:

The claiming  the protection of retrenchment procedure under section 20 must be a ‘worker’ within the definition in clause(65) of secion2;

The person must belong to a particular category of workers in the establishment concerned;

(1)               At the time of retrenchment the worker must be paid compensation equivalent to thirty day’s wages for every completed year of service or for any part thereof in excess of six month’s or gratuity, if any, whichever is higher,

(2)               To claim compensation for retrenchment the worker must show that he has been in continuous service for not less than one year under that employer who has retrenched him;

(3)               If a worker who is to be laid-off even after first 45 days in a calendar year under section 16(7), is retrenchment instead of laying-off, no notice will be required. However, he shall be paid 15 day’s wages in addition to the compensation or gratuity which may be payable;

(4)               Wages as compensation for retrenchment will mean the average of the basic wages plus dearness allowances, if any, paid during the period of twelve months immediately preceding the date of retrenchment.

Retrenchment of surplus workers causes undue suffering not only to the retrenched worker but to all his dependents. Therefore in order to avoid hardship to the worker and his family the provisions have been made in section 21 of the code that such workman should be given an opportunity to join service whenever an occasion arises to employ another hand. This principle was regarded as of general application in industrial adjudication on the ground that it was based on considerations of fair play and justice. The section provides that after effecting retrenchment, if the employer proposes to take into his employment any person:

(1)               He shall give opportunity to the retrenched workers who offer themselves for re-employment; and

(2)               These retrenchment workers will have preference over the new applicants. Thus section 21 imposes legal obligation on the employers to give preference to retrenched workers when he subsequently employers any person.

Condition of re-employment for retrenchment workers

A retrenched worker may claim preference under section 21 on the fulfillment of the following conditions:

(2) The worker must offer himself for re-employment in response to the notice by the employer;

(3) Workers will have priority according to the length of his service under the employer;

Distinction between lay-off and retrenchment

(1)               In case of lay-off there is failure, refusal or inability of the employer to give employment to a workman for a temporary period while in retrenchment the workman is deprived of his employment permanently by his employer.

(2)               The grounds of lay-off are May. In lay-off the failure refusal or inability to give employment is on account of one or more of the reasons specified in section 2(58) such as shortage of coal shortage of power, raw materials, break down of machinery etc. while in retrenchment the termination of service is on the ground of surplus labour only. Thus the ground of retrenchment and lay-off are completely different.

(3)               The reasons of lay-off are completely different as compared to reasons of retrenchment. The situation of surplus labour may arise due to economic drive, rationalisation in the industry installation of new labour saving machinery etc. But in lay-off reasons of non-employment are mainly non-availability of power raw materials, coal or break down of machinery etc.