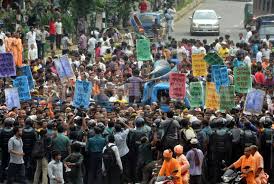 Immediately after liberation, the Government of Bangladesh enforced on March 26, 1972, the Bangladesh Vesting of Property and Assets Order, 1972 (Order 29 of 1972) By this order, the Vested Property left behind by the Pakistanis and the erstwhile enemy properties were combined to a single category. However, in 1974 the Government of Bangladesh passed the Enemy Property (Continuance of) Emergency Provisions (Repeal) Act.East Pakistan remained vested in the Government of Bangladesh under the banner of vested property. At the sometime, Government also enacted another law namely the Vested and Non-resident Property (Administration) Act (Act XLVI) of 1974. This act was enacted to provide the management of certain properties and assets of the persons who are non-residents of Bangladesh or have acquired a foreign nationality. Though the principal aim of the Act XLVI of 1974 was to identify and take over the properties of those residents who left Bangladesh during/immediately after liberation war and/or took foreign citizenship, in practice this Act XLVI of 1974 was also widely used against Hindu minorities who had no connection with Pakistan for quite valid and obvious reasons.