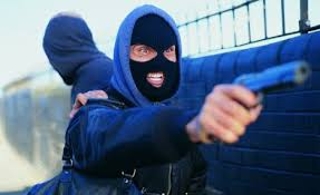 A violent crime or crime of violence is a crime in which an offender uses or threatens force upon a victim. This entails both crimes in which the violent act is the objective, such as murder, as well as crimes in which violence is the means to an end. Violent crimes may, or may not, be committed with weapons. Depending on the jurisdiction, violent crimes may vary from homicide to harassment.Typically, violent criminals include aircraft hijackers, bank robbers, burglars, terrorists, carjackers, rapists, kidnappers, torturers, active shooters, murderers, gangsters, drug cartels, and others.