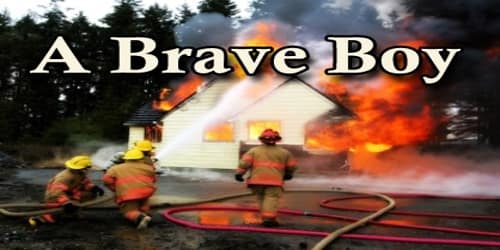 One day a boy was going to school. Suddenly he saw smoke. It corning out of a house. He went in. He saw a house on fire. There was nobody else near the fire. Only a few women were running to and fro. They were crying bitterly. The boy thought that there might be somebody in the house. He/she could not come out. There were flames and flames on all sides. It was a great danger. The boy was brave enough to cope with the situation. He was not at all afraid. He then and there ran into the burning house. He made several attempts to put out the fire.

The boy found an old woman reaching there. She was too weak to move. The boy took her on his shoulders. He then came out running with her. People saw it. They were happy to see this. They called him a brave boy. The headmaster of the school heard the story. He congratulated the boy on his brilliant feat. This is really a worthy act for which the school also felt proud.