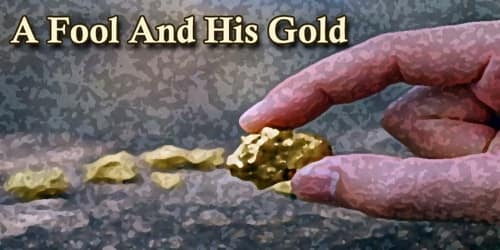 A Fool And His Gold

Once upon a time, a young fool named Ivan went into the world to find what he could find. The first night he lay down on the cold ground and fell fast asleep. When he awoke, he discovered to his amazement a hole in the ground beside him. When he looked into the hole, he found a big leather bag. When he opened it, he discovered hundreds of gold coins.

“I’ll take this money to the king!” he said. So he set off for the palace.

Soon he came to a wide river where he boarded a ferry. As he traveled, he told everyone onboard about his gold. “I am not wise in the ways of the world,” he said. “And so I’m off to see the king. I hear the king says every coin in the realm belongs to him.”

The people smirked when they heard Ivan’s tale, and when his back was turned, they reached into his bag and stole the gold coins. In their place, they put their belongings so that Ivan would not feel the bag growing lighter. They put old combs and pocket knives and apple cores and broken pottery inside the bag. But Ivan was a fool, and he never noticed.

When the ferry landed, Ivan went to see the king.

“I’ve come to give you a bag full of gold,” Ivan said to the king.

The king could not believe his ears. Everyone came to the palace to ask the king for money, but here was a man offering to give it away.

Ivan smiled and opened his bag, and the king howled with fury when he saw the knives and pottery and apple cores and other odds and ends. The king’s servants dragged Ivan outside.

“Oh,” Ivan sighed. “I am not wise in the ways of the world. Please tell me, what should I have said to the king?”

“You ought to have said you were sorry for the waste of time,” they said.

Ivan nodded and walked on. Soon he came to a farmer who stood to lean on his hoe over his field. He was exhausted from planting a huge field with cabbage seed.

Ivan looked at the field. “Sorry for the waste of time,” he said.

The farmer was furious and raised his hoe, ready to hit Ivan.

“I am not wise in the ways of the world,” Ivan cried. “Please tell me what I should have said.”

“You should have said, ‘May everything you plant grows into cabbages,’” the farmer said.

Ivan nodded and went on his way.

Before long he came to a graveyard where a man was being buried. “May everything you plant grows into cabbages,” Ivan called to the mourners.

They turned on him, ready to punish him. “What should I have said?” Ivan asked worriedly.

The priests turned on him. “Fool!” they cried. “Priests do not marry or have children. Don’t you know that?” And they shook their fingers at him and told him again what a terrible fool he was.

Ivan was mystified. He could not imagine what he would do or how he ever would learn to be wise in the ways of the world. He decided he would take a nap.

While he was sleeping, a big black bear crept near him, and just then Ivan woke. He could not imagine what the bear wanted, but he thought he might like entertainment. And so Ivan reached into his pouch and pulled out a bell. He began to ring the bell as loudly as he could.

The bear turned and ran away, and Ivan stood and chased after him. “Perhaps a bear can teach me the ways of the world,” he thought, and he ran as fast as he could.

But when he reached the bear, he saw that he was busy chasing three other men. As the men raced away, gold coins fell from their pockets, their socks, and their hats. The men, you see, were among the thieves Ivan had met on the ferry.

Ivan stopped and stared as the bear chased the men far away. And then he remembered the king. He picked up the coins, one after another. He put these in his pockets, his hat and socks and shoes, and set off for the palace once more.

When he reached the gates, the servants cried angrily, “What do you want?”

“I’ve come to bring gold to the king,” Ivan said.

But when the servants told the king about his visitor, the king threw up his hands in exasperation. “He’s a fool. Tell him to keep his gold or I’ll throw him in prison. Tell him that from now on, whatever he finds he must keep.”

Ivan did as he was told. He carried his gold back home and lived happily ever after, though he often wondered how he might become wise in the ways of the world.