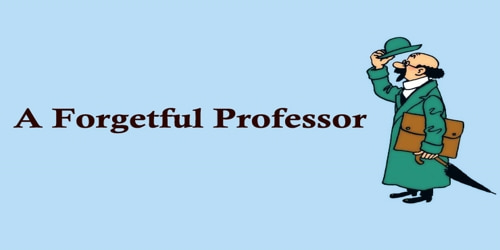 Once there lived a brilliant Professor In a city. He was also a very nice person. But most of the time he was found lost in study. As a result, he would often forget important matters, which sometimes resulted in funny and unfortunate things. Once his wife requested him to celebrate their marriage day in a grand way. He loved his wife very much. So he took preparation to arrange the party. Many aristocratic persons were invited to the party; He hired a cook and booked a community center. He also got some cards printed. The man ran from shops to shops and arranged various things for decoration. He also collected different kinds of flowers.

Just before the day of their marriage day he was invited by another professor living in another city. He went there without taking his mobile phone with him. The professor received him cordially and requested earnestly to stay at his house for that night. The man agreed with him forgetting about the party. The next day while taking lunch he could remember everything and hurriedly left for home.