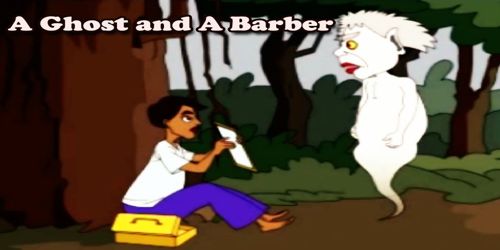 A Ghost and A Barber

Once a barber was passing through a jungle. The jungle was haunted by a ghost. He knew it. But he was very brave and cunning. Suddenly he saw somebody sitting on the branch of a tamarind tree. He got startled. But he was not such a person who would run in fear. He approached towards it courageously. The ghost also got down from the tree and stood in his way. The barber saw that the ghost was strange to look at. His hands, legs, teeth, nose were deformed. He made a barricade extending his hands and told that he (ghost) would kill him (barber). In a shrieking voice the ghost said, “Hey barber, I will now kill you and eat you up. Nobody can save you.”

The barber got angry but suppressed his anger. He could realize that he had to defeat him by the intellect, not by bodily power. With ready wit, he said, “Do you know I have a mightier ghost than you and he obeys me strictly?” The ghost got furious and said, “I don’t believe that there is any ghost other than me in this locality.”

Then the barber took out his mirror and put it before the face of the ghost. The ghost has not seen such a terrifying face before got terrified. Still, he wanted to frighten the ghost in the mirror (his reflection). The reflection also frowned. The ghost without standing a single moment there ran away in extreme fear. The barber started for his home with great delight.