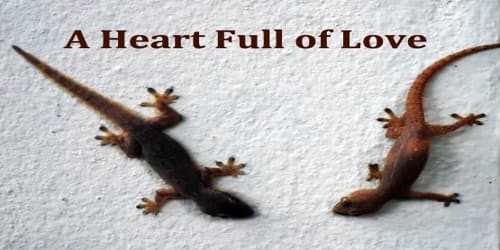 A Heart Full of Love

Mr. Rajon’s family decided to renovate his home. He purchased the home before two and a half years. Since his kids were growing, he and his wife wanted to renovate it. They decided to break and open their living room wall. Initially, when Rajon bought his house, wooden walls were used as a part of interior decorations. He decided to remove the wooden walls. The wooden walls were removed and he was shocked to see a lizard stuck in the hollow space between the walls. He was greatly surprised and wondering how the lizard was there because the wooden wall was completely sealed and there was no room to move behind the walls. He saw that lizard’s feet were struck by a nail, which was hammered from outside. Rajon and his family were really amazed seeing the lizard behind the wooden wall and felt too bad for it. Mrs. Rajon reminded him that they hammered a nail to hang their kid’s photo.

However, they all had a question that now how the lizard survived for up to now without moving from the place. The family decided to wait for some time and see the magic how the lizard with a nail stuck on its feet survived for several months without moving. The obvious question is how the lizard survived without food as it could not move. While they were arranging other things, they had an eye on another lizard. Rajon’s son shouted in a while, ‘Dad look here!’ Another lizard appeared carrying the food in the mouth. Yeah, that was a real surprise. The lizard fed food to the one stuck in the wall. This act was so heart touching and everyone was so amazed at the lizard for feeding the stuck one for a long time without getting tired. Both the lizard carried the hope of surviving all odds and emerging from the difficult situation. Both the lizards had never-ending hope on each other and carried a heart full of love and care.

The little creature is blessed to carry such a wonderful heart and brilliance. Why not we the human beings, the mammals with six sense and bestowed with luxuries of life carry love and care in our hearts, rather than hatred?