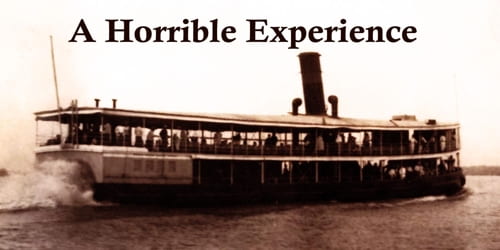 One day I decided to go to Chandpur by steamer. Accordingly, I reached Sadarghat and boarded on the steamer. It was a moonlit night. I was waiting to enjoy the journey as it was first ever in my life. The steamer started. After a few hours, a strong wind began to blow. I became highly scared as we were in the middle of the river. It became cloudy and the passengers of the steamer became very anxious. After a few moments, it started raining cats and dogs. However, the authority of the steamer assured us that they had enough life-supporting arrangement such as life jacket, life-boats, etc.

At the evening while we were near Chandpur the storm hit. The steamer started waving left and right. The authority of the steamer requested us to keep quiet and pray to God. Everybody became fearful. The children started crying and the elderly people started reciting the holy verses. Some people suggested the authority of the steamer to stop the engine or try to drive towards the nearby bank. But the authority could not think what to do. The storm lasted an hour. Then everything became normal again. The river became quiet too. At last, we reached our destination safely.