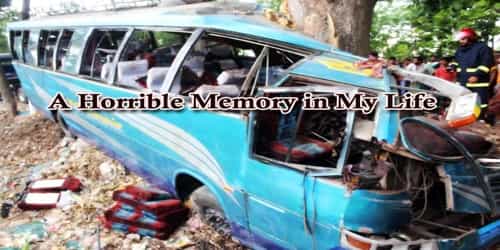 A Horrible Memory In My Life

One day I was going to Dhaka from Rajshahi by bus. There were almost 90 passengers on the bus. So it was over-crowded and every passenger was feeling discomfort. Though it was a gate-lock bus, the conductor took many passengers from the road. As the bus started a bit late and had to stop at different places to take so many passengers. It was running late for the scheduled time. The bus was running at high speed because the driver was trying to cover the time at any cost. As there were many vehicles plying on the road, the driver had to take risk while overtaking any vehicle. There arc so many dangerous corners in the road and roadside busy bazar area. Therefore there is always a possibility of an accident. When the bus crossed the Jamuna Bridge, the driver started a competition with another bus. All the passengers tried to stop it but the driver hardly paid heed to our shouting. We were very tensed. Suddenly another running bus coming from the opposite direction was about to cross our bus. Our driver was unconscious a little bit.

While the bus was Just in front of our bus, our driver tried to take the bus to the safe side. Before he could do that, the bus hit our bus and our bus skidded off the roadside ditch. The drivers jumped out of the window road and ran away. But twenty passengers were spotted dead. As our bus was overcrowded, many passengers were injured while coming out of the bus. I was lucky enough to remain alive with small injury in the arms. But I was horrified to see so many dead passengers. There were a hue and cry everywhere. The police reached the spot after a while. They sent the injured persons to the nearest hospital. I came back home but came with a horrible memory of the accident.