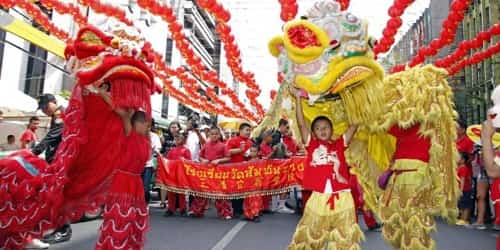 A Lion Dance that you have watched

A Lion Dance that you have watched –

The lion dance is a traditional dance performed in Chinese culture. Chinese New Year is a time of festivity for the Chinese, and one of the ways of celebrating it is to have a lion dance in front of the house or business premises. A lion dance is believed to bring luck to the place. However, by understanding them, a greater appreciation for this ancient ritual can be gained. By listening and watching performances of the Lion Dance, I can explain some ways that lion dancing originated and the tools that are necessary to perform a lion dance.

It was the eighth day of the New Year. My friend, who has a computer shop in town, invited a troupe of lions to usher in the year at his shop. A one-ton truck carrying the troupe arrived at the premises at 9:30 a.m. The troupe had two lions, one red and the other yellow. The performers were young men and boys from a local Chinese association. The colors of the lions vary like the color of the rainbow. Each color has its own significance and meaning. The nose of the lions is usually a green color. Green symbolizes good luck, prosperity, and the “influence of heaven.”

The Lion Dance is performed most of the time with only two people. The Dragon Dance is performed with many people. Each lion costume had two performers inside it. The big drum rolled and the cymbals clanged. The lions started dancing to the pulsating beat. The performers were very skillful as they pranced around in mock combat. The thunderous beat of the drum soon attracted a sizable audience in front of the shop.

The dance went on for about ten minutes as the drum kept the tempo going. The performers must be really fit to keep the action going at the frantic pace. After claiming their prizes, the two lions stage a final round of dancing. When the dance concluded, the spectators gave them a hearty round of applause. It was a fine performance. Nowadays, Lion Dancers throw lettuce at the audience in order to spread good luck around because the greens represent wealth.

There are different styles to Lion Dancing and they are each represented in various ways. For example, the Buddhists believe this dance spreads courage, energy, and wisdom to people. The way to tell these lions apart by gender is to see the bow on the head. The females don a green bow while the male lions wear a red bow.

The members of the troupe then had snacks and drinks that were prepared for them. Finally, the troupe packed their things and got on their truck to go and stage another performance somewhere else in town.