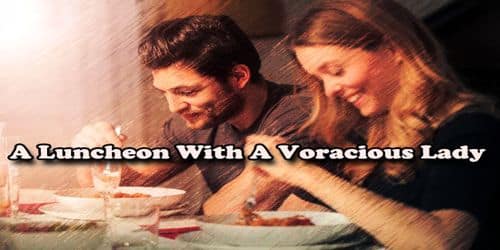 A Luncheon With A Voracious Lady

It was twenty years ago when I was living in an apartment overlooking a cemetery. I was just living from hand to mouth. At that time a lady wrote a Letter to me praising one of my writings just published in the newspaper. It made me so excited that I sent her a letter of thanks. Immediately after that, she wrote her second letter saying that she wanted to have a little luncheon at Foyot’s during her stop-over in Paris.

Foyot’s was one of the most expensive restaurants in Paris. I felt flattered and agreed to entertain her. We met at Foyot’s on the appointed day. I was disappointed after I had seen her because she was not so attractive as I had expected and she was talkative as well. The cunning lady said to me that she would not take anything for luncheon. I requested her to have something. Then she said, “I don’t take more than one thing for luncheon.” She wanted to eat salmon fish. I ordered it for her. She said that she would not mind having a little caviar. I ordered it. My heart sank because of the limited money I had with me. So I chose a mutton chop for myself as it was the cheapest dish on the menu. When the question of the drink came, I was obliged to order half a bottle of champagne for her. I was also obliged to order for her asparagus, ice-cream, coffee, and even peach. I ordered a coffee for myself.

After paying the bill, I had only three Francs left which I paid the waiter as a small tip. At the time of departure, the lady advised me to eat only one thing for luncheon. I retorted that I would not take anything for dinner that night. The lady called me a ‘humorist’. In fact, that night I had no money to have dinner. I happened to meet the lady after twenty years at a theatre. I was happy thinking that I had had my revenge at last because the lady weighed twenty-one stone and looked very funny and ugly.