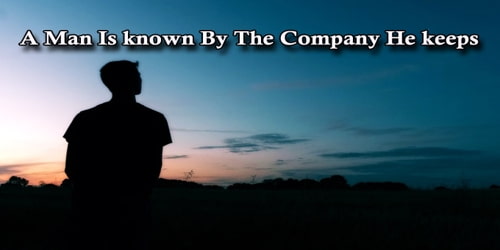 A Man Is known By The Company He keeps

Once a man had a son who had some bad friends and he passed all his time with them. The father was very sorry for his son. He gave his son much advice to leave the bad company and to give attention to study. But the boy did not follow the advice. Another day the man said to his son that a man is known by his company and he mixed with bad boys, people would think him bad, but the advice went in vain. The old man became frustrated and gave up all his hopes. One day his friends committed a crime where he was absent. But his friends spread that he committed the crime to save them. A case was filed against him in the local police station.

To become free from the charge he went to several friends but no one came forward to save him. Day by day he became more helpless and even he had to leave home. He was caught by the police and beaten severely. Finally, he realized his fault that he was disobedient to parents. He asked his father’s pardon for mixing with bad companies. His father forgave him and took a step to prove him innocent.