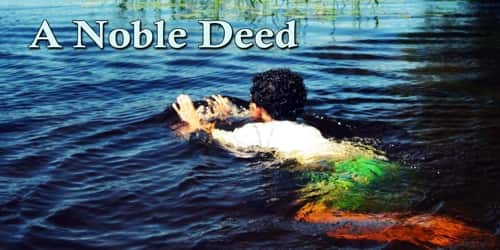 It was a cloudy day. At noon I was walking alone. Suddenly I heard fearful shouts of some children. The sound was coming from a nearby pond. I rushed to the spot. To my utter dismay, I found two children in the middle of the pond fighting hard to save them from being drowned. Four other children were on the bank of the pond shouting loudly for help. For a moment, I was just puzzled. But the next moment I dived into the pond and swam as quickly as I could towards the two children. They were very close to each other. Both the children, enfolded in each other’s arm, were going down to the bottom of the pond. I was a trained swimmer and learned how to rescue a drowning man. I caught hold of the two children and swiftly pulled them up to the surface and swam back to the bank by doing the backstroke.

In the meantime, a large crowd gathered on the bank of the pond. When I reached the bank the crowd clapped cheering my valor. But the two children were senseless. I made them lie on their backs and pumping water out of their stomach. The two children gradually opened their eyes. The parents of the two children came running. They cried loudly and expressed their gratitude to me for saving the lives of their children. They took their children home. The crowd also dispersed. I sat on the bank of the pond with my wet body. A pleasant feeling filled my heart. It was a pleasant feeling of performing a noble deed. It was a simply divine delight of saving two pure, innocent lives.