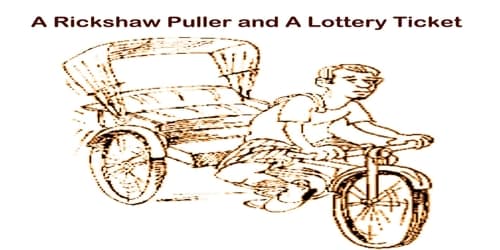 A Rickshaw Puller and A Lottery Ticket

Once there lived a poor rickshaw-puller. 13ut he was very sincere. He earned his livelihood working very hard. One day while he was out of his house he saw many men selling lottery tickets. One day while pulling the rickshaw he was tempted the words of the ticket sellers. He bought a ticket. He knew the date of the draw. He was waiting eagerly for the date. The much-awaited date arrived and he bought a newspaper and to his utter surprise, he saw his lottery ticket number to be the winner of the first prize. His Joys knew no bounds. It spread far and wide. Then he met the local government officer with his lottery number. He examined properly and managed to get his biggest amount of money from the authority with security.

Kamal the poor rickshaw puller wanted to invest his money in a poultry farm in his village. There he would employ some people from his village. After some time he began to earn a lot of money. In this way, he used all his money in a productive field. As a result, he was benefited and became a rich man in his area. On the other hand, some young people got their Jobs. So he was able to solve the unemployment problem and he became an affluent man.