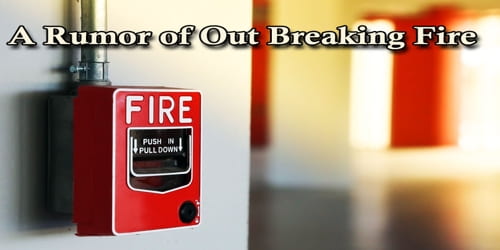 A Rumor of Out Breaking Fire

Salma Khatun works in a big garment factory. There are more than five hundred workers in the factory. One day, as usual, she was busy at her work. Suddenly a sound came to her ears that there was a breakout of fire from the short circuit. As ill-news runs fast, the news spread very fast among the workers. But no one noticed whether there was actually any fire. She got terribly scared and tried frantically to come out of the garment factory but in vain. All the workers and officers rushed to the gate to save their lives.

As everybody wanted to get out first, all they could do was just huddling together in front of the gate. Several workers got injured. Meanwhile, a siren was ringing. With the sound of the siren, came words like ‘Don’t worry’. There is actually no fire; no fire has broken out. In fact, it has been a rehearsal to see the problems and difficulties that may crop up in case of any sudden outbreak of fire in the factory. Salma heaved a sigh of relief. She felt relieved and thanked God that there was, in fact, no such mishap as fire.