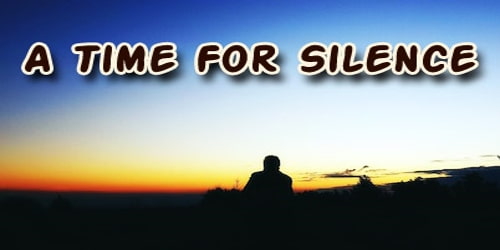 A Time For Silence

Once upon a time, as a poor man was walking through the forest, he came upon a fiercely burning fire. A young snake was caught right in its center, a rock upon its tail. “Please save me,” the snake called to the man. So the man picked up a stick, knocked the rock off the snake’s tail, and held the stick out to the snake, which quickly slithered out of the fire. The moment he was free, he wrapped himself around the man’s neck.

“Don’t harm me,” the man cried in fear, but the snake did not tighten his grip. Instead, he said, “I never would harm you. You’ve saved my life. I’ll take you to my father, who is king of the snakes, and he’ll grant you a wish. Promise me this, though. You will ask him for the best gift of all. Ask him to give you the power to understand the language of the animals.”

Off they went to see the king of the snakes. The king was so grateful to see his son safe and alive; he offered to grant the man a wish.

“I wish to understand the language of the animals,” the man said.

“A fine wish,” said the king, “and I will grant it on one condition. You must never tell anyone your secret. If you do, you will die.” With that, the snake king instructed the man to open his mouth. This the man did. Then the king blew three times into the man’s mouth and sent him on his way.

As the man walked through the forest toward his home, he was amazed at all he could understand the language of every bird and every beast. As he walked beneath a tree, he overheard two ravens chatting, and he stopped to listen more closely. “If only that poor man knew how much treasure is buried just below this tree,” one of the ravens said, “he could dig it up.”

“And he would live happily ever after,” said the other raven.

The man, hearing this, began to dig beneath that very tree, and sure enough, he found a trunk brimming with gold and silver and jewels. With his newfound wealth, he bought a farm and hired many people to work it. Soon afterward, he married. He was kind and gentle to all, and everyone liked him.

Sadly, though, his wife was not so kind and was forever badgering and pestering and nagging everyone.

One night in midwinter, the man was walking to the barn when he overheard his dogs talking among themselves. “Remember, tonight is the night the wolves are coming to eat the sheep. We’ll all pretend to be sleeping, and they’ll share their feast with us.”

But the man’s oldest dog, a big, soft, lumbering collie, loudly objected. “I’ll never let those wolves eat the sheep while I’m here to guard them,” he said. “I owe my master for all his years of kindness, and I won’t let him down.”

When the man heard this, he instructed his workers to send all the dogs away all, that is, except his old collie. He shepherded the sheep into the barn for the night, and once inside, he showered his old dog with still more kindness.

The next day, as the man and his wife, were riding their horses into the village, the horse the man was riding turned to the other and said, “Ha ha, you have to carry that old nag upon your back. If I were you, I’d kick up my legs and toss her.”

When the man heard this, he laughed, and his wife asked, “What’s so funny?”

“Oh nothing,” the man said sheepishly. “I just felt like laughing.”

“Tell me why you’re laughing,” she demanded. “Tell me now.”

“Nothing,” the man insisted, and the horse said to his companion, “There goes the old nag,” which set the man laughing again, still harder this time.

When his wife heard him laughing again, she began to pester him, insisting he tells her just what was so funny. “Tell me or else,” she threatened, and the poor man, exhausted by her constant badgering, gave in.

When they arrived home, the man ordered his workers to bring him a coffin. When it arrived, he climbed inside, and said, sadly, “Wife, I am prepared to tell you my secret, but after I tell you, I’ll die.”

“Fine then,” said his wife. “Tell me and be quick about it.”

But just then the faithful collie began to howl. “Feed the dog before I tell you,” the man said to his wife.

The wife angrily filled the collie’s bowl, but the dog only continued to howl. “Master, master,” he cried woefully, “can’t you see you are too kind for your own good? You’re letting your nasty wife force you to tell a secret even though you know you will die when you do. Then I shall be forced to live alone with her, and I’ll be listening to her nagging day and night. It is only foolishness that causes you to be so kind to someone so undeserving.”

When the man heard this, he realized he was being a fool. How silly to think of telling his secret when he could remain alive and continue to do well. And so he said firmly, “Wife, I’ll never tell you why I was laughing, and I’ll never tell you or anyone else my secret and you’ll have to live with that.”

He never did tell anyone at all, and although he continued to be kind, he was never again so foolish.