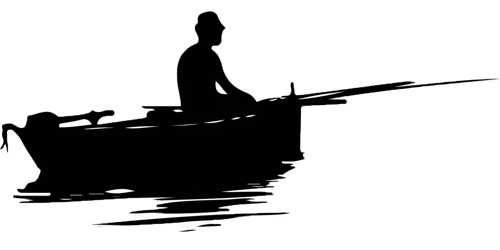 A tough day of Fisherman

Fishing is a hard occupation. The man who earns his living by catching and selling fish is a fisherman. Generally, a fisherman lives by the rivers, big canals, marshy lands and seas for his professional advantages. Sometimes the sea becomes suddenly turbulent and the members of their family remain anxious for their safe return. Here I’m telling a story of a fisherman’s tough day. It was a beautiful day to go fishing so Veera decided to do just that. He packed up a few things, got ready his fishing rod and bait and set off. When he reached the beach, he hired a sampan from his fisherman friend and rowed out to sea. The water was clear and calm.

It was his lucky day indeed for he caught a lot of fish. Veera felt very happy and satisfied. Then he decided to call it a day. The clouds had begun o turn dark and there were flashes of lightning in the sky. Veera tried to row back to shore but the current was very strong. He threw out his catch to lighten his load but it did not help.

Just then, a big wave overturned his sampan. The next minute, he was in the sea, gulping in a lot of water. Each time a wave came down hard on him, Veera feared for his life. He could only pray that help would come soon. Then the sea became less stormy and Veera fell into a fitful sleep clinging onto the sampan for dear life. 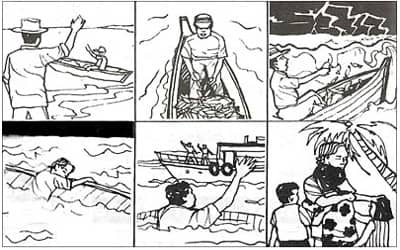 The next morning, the sea was calm again. Veera was still hanging onto the sampan. He was feeling very weak and his throat was parched. Suddenly, he saw a boat coming his way. Veera gathered all his strength to shout and wave to the crew. At last, he was spotted. They sent down a lifeboat for him.

They wrapped him up in a blanket and gave him a hot drink. The captain told him that his fisherman friend had alerted them about him after he failed to return last night. Veera could only thank the captain, his crew and his fisherman friend for saving his life. When they reached the shore, his wife and children were there waiting for him. He embraced them emotionally and was grateful to be alive. No doubt that they are laborious and painstaking. But their earning is not proportionate to hard work.