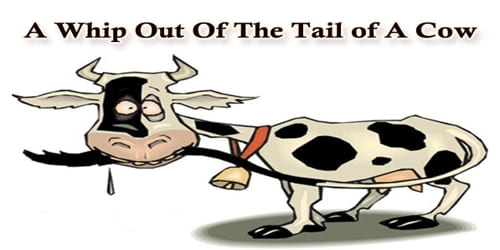 A Whip Out Of The Tail Of A Cow

Long, long ago in Africa, there lived a hunter. His name was Ogalussa. Once he went to the forest to hunt and his wife with their five sons went to the fieldwork. The family came home in the evening. But Ogalussa was not yet back. The family waited and waited for him. But he didn’t come. They had their supper without him. Night came. Then morning came. Then again night came. But Ogalussa did not come home. A week passed. A month passed. And after a sixth son was born to Ogalussa’s wife. Puli was his name. Ogalussa did not come back. Every day Ogalussa’s wife worked in the field. Sometimes the sons helped her. Sometimes they went to the forest to hunt. Sometime later the family forgot about Ogalussa. The youngest son Puli could already walk. But he could not talk. But one day he opened his little mouth and began to talk. His first words were, “Where is my father?” Where is our father?” asked the eldest brother, too.

“We must go to the forest and look for him,” said the second brother.

“There is the path he walked along,” said the third brother.

“Let us go along that path and I am sure we shall find him,” said the fourth brother.

“Let us go at once!” those were the fifth brother’s words.

And the five sons took their guns and went along the path.

The path was long, very long. At last, they came to a place where they saw Ogalussa’s bones and his old gun on the ground.

The eldest son said, “I can put the bones together.”

And he put the bones together as they are in a man’s body.

Then the second brother said, “I can cover the bones with skin.”

And he covered Ogalussa’s bones with skin.

The third brother said, “I can fill his body with blood.”

And he did his work well.

Then the fourth brother said, “I shall make him breathe.”

In a few minutes, Ogalussa began to breath

And the fifth brother made him stand up.

Ogalussa stood up, opened his eyes and asked, “Where is my gun?”

The sons gave him his old gun and they went home together.

At home, he washed, cut his hair (the people who come back from the Land of the Dead must cut their hair), had his dinner and then rested for some days. All the family was very happy. And so were his neighbors. Ogalussa called his neighbors to a feast and killed a cow. His wife cooked the meat for the feast and Ogalussa made a whip out of the cow’s tail. He put some bright beads on it and the whip was very nice. The feast began. All the people came dressed in their best clothes. Musicians played, the people danced and sang. All were very happy.

Ogalussa showed his new whip to the guests. “This is the nicest of all the whips,” they said. Many of the guests ask Ogalussa to give them the whip. But Ogalussa did not give it to the guests.

Then he began to speak, “Long, long ago I went to the forest to hunt. A strong lion killed me. I was dead for a long time. Then my sons found my bones and brought me back to life. Now I am here among you. I am very thankful to my sons! Look here, my dear guests, I have a whip and you say it is the nicest of all the whips. But I have only one whip! I shall give it to the son who helped me most of all to come back from the Land of the Dead.”

Then all the people began to think, “Who helped most of all?”

It was not so easy to tell! At last Ogalussa said, “I shall give the whip to little Puli His first words were, ‘Where is my father?’ Thanks to him my sons went to the forest to look for me. Thanks to Puli I am here with you and my family.”

And he kissed the little boy. All the people said, “Ogulussa, you are right!”

And even in our day’s African people say, “A man is alive as long as you remember him.”