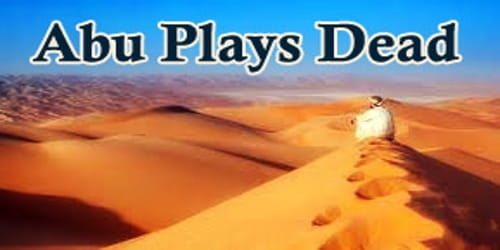 Abu was poor, but he was nobody’s fool. Sometimes, though, he played the fool, and when he did, the caliph who ruled the town laughed so hard, he could not stop. The caliph grew to depend upon Abu for a good joke, and so the caliph moved Abu into a home beside his palace. Not long afterward, Abu married the grand vizier’s daughter, and the caliph supplied them with gold.

Abu and his wife lived in comfort for a year, but one day Abu’s wife asked him for coins to buy a dress, and Abu realized they were almost out of money. He knew he must ask the caliph for more, but he did not want to do this. He felt ashamed.

He knew he must come up with a plan. “Here’s what we’ll do,” he said to his wife. “You go to the caliph and tell him I suddenly took ill and died. He will give you money for the funeral, and you will have plenty of coins to buy many new dresses.”

Abu’s wife played along. She pulled at her hair until it was sticking out every which way; she rubbed onions on her cheeks until she wept. And then she went to see the caliph to tell him that Abu had died.

Not long afterward, Abu saw his wife walking toward their house. She was carrying no gold. Instead, she was leading the caliph and his doctor. Now, what would he do? He was supposed to be dead. So he ran to the hearth and spread ashes upon his face, lay down on the floor and closed his eyes.

“Dead he is,” said the doctor, who not step closed for fear of catching whatever disease had so quickly killed Abu.

The caliph wept. “I will miss him as I would miss a son,” he said, and he handed Abu’s wife a purse full of gold. “This will pay for Abu’s funeral,” he said. “And I will always look after my beloved Abu’s wife.”

Then the doctor and the caliph returned to the palace.

Abu and his wife were laughing with glee when Abu had another idea.

This time Abu mussed his hair and rubbed onion on his cheeks, and then walked to the grand vizier’s house to give his wife’s father the sad news about his daughter’s sudden death.

Soon Abu was walking back toward his own house, the grand vizier and his doctor behind him. When Abu’s wife saw them coming, she spread ashes on her cheeks and lay down on the floor.

“Ah,” said the doctor when he opened the door, “I’m sad to say Abu is right. Your daughter is dead.” He too refused to step too close for fear of catching a disease.

The grand vizier wept. “I shall always love you like a son, Abu,” he said, “and here is some money for my daughter’s funeral. Please let it be lavish.”

When the grand vizier and the doctor were gone, Abu and his wife began to laugh again at the success of their trick. Their scheme was working. “Now,” Abu said, “we will wrap ourselves up like two dead bodies and we’ll go together to the palace to share our laughter.”

In the meantime, though, the grand vizier ran to the caliph. “Ah, great protector,” he said, “I have terrible news. My daughter, the wife of Abu, has died.”

“You are confused, good man,” the caliph said. “It is Abu himself who is dead. I saw his body.”

“That cannot be,” the grand vizier answered. “I’ve just come from home. I’ve seen him. He’s as alive as you and I. It is my daughter’s body that lies on their floor.”

“We must settle this,” said the caliph, and together the two men marched toward Abu’s house. When Abu saw them coming, he whispered to his wife, “Hurry now.” They had yet another joke in mind.

The caliph and the grand vizier, their servants and the doctors and neighbors gathered. They opened Abu’s door. For a moment everyone was silent. Two bodies lay upon the floor.

“Dead as doornails,” said the doctors.

“But who died first?” asked the grand vizier. “I saw Abu alive.”

“Your daughter was alive,” said the caliph, “and Abu was dead. I am sure.”

“We must settle this!” said the caliph, and he turned to the gathered crowd. “I will give a thousand gold coins to anyone who tells me who died first.”

The caliph began to laugh harder than he ever had laughed, and he gave Abu a thousand gold coins for answering the question, and another thousand for his intricate joke. And he promised to always give him gold coins whenever Abu needed them, for he wished such a clever man never to be poor again.