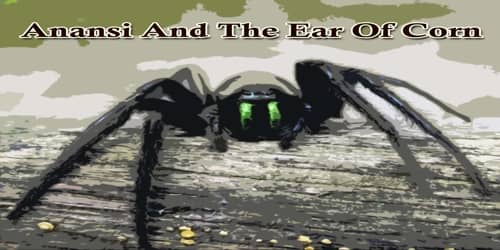 Anansi And The Ear Of Corn

God was amused. “What sort of miracles can you work?”

Anansi chuckled. “Give me one ear of corn, and I’ll get, in exchange, 100 soldiers.”

Now God had grown weary of Anansi’s idle boasts, and so, seeing no harm in this, God gave Anansi one ear of corn. “Let us see your miracle,” God said.

“Just you wait,” Anansi promised. “I’ll return in one week’s time with 100 soldiers for you.”

“I don’t want your soldiers,” God said, “but do what you will. You have one week then.”

Now everyone knows Anansi is a trickster, but everyone also knows it is impossible to turn one ear of corn into a hundred soldiers. The villagers laughed when they heard about Anansi’s boast.

But Anansi had a plan. He took his single ear of corn and set off on a journey. The first night, he stopped at an inn and said to the innkeeper, “Do you see this ear of corn?”

“Of course I do,” the innkeeper replied.

“This is a sacred ear of corn,” Anansi said. “It belongs to God. No one must ever touch it.”

The innkeeper gave Anansi his own private room, for he did not wish to risk having someone steal God’s ear of corn.

In the middle of the night, Anansi sneaked out of his room and took the ear of corn out to the chicken coop, where he broke the kernels from the cob and scattered them on the ground for the chickens to find at daylight.

In the morning, when Anansi awoke, he said to the innkeeper, “Someone has stolen my ear of corn! Come look! It is gone!”

Well, of course, the fear was gone, and when Anansi saw kernels upon the ground around the chicken coop and the empty corn cob, he chided the innkeeper. “Someone has stolen God’s corn and fed it to the chickens. You will surely pay for this,” he said sternly, shaking the cob at the innkeeper.

Quaking, the innkeeper said, “Please, let me try to make it up to you.” For his troubles, he gave Anansi his biggest, fattest chicken. “Please tell God I offer this chicken in payment for the sacred corn. And please beg for my forgiveness.”

Anansi told the man he would do his best to argue the case, and off he went. That night he stopped at a second inn, and there he told the innkeeper that his chicken was a sacred chicken. “It belongs to God,” he said. “No one must touch it.”

Here again, the innkeeper made certain to give Anansi a private room, but in the middle of the night, Anansi awoke and killed the chicken and he placed the creature outside the innkeeper’s door.

The innkeeper was terrified. “Please, let me repay God,” he said, and he offered Anansi a dozen of his finest sheep.

“I’ll take them and see what I can do,” Anansi said, and off the set, leading his 12 sheep behind him.

As he was traveling along, he came upon a burial party. Several men were carrying the body of a traveler who had been found beside the road. Since they didn’t know where the young man came from, they were going to bury him at a local site. “Please,” Anansi said, “I shall trade you my 12 sheep for the body; for I believe I know where he came from.” The burial party quickly agreed and made the trade.

Now Anansi traveled with the body to a faraway town. “I have brought with me a child of God,” Anansi announced as he entered the village. “Quiet, please. God’s child is sleeping peacefully.”

No one dared touch the young man. The innkeeper gave Anansi a large and luxurious room to share with the child of God, but in the middle of the night, Anansi moved the body down to the main entryway. In the morning, he raced downstairs, crying and shouting, “Where has God’s child gone?”

Everyone woke and came to see what so troubled Anansi, and now they saw him weeping and wailing over the body that lay outside the innkeeper’s door. “Someone in this town has killed God’s child!” Anansi cried, and the village doctor came to have a look.

The people were terrified of God’s wrath. “What can we do?” they asked Anansi, for Anansi seemed to be a wise man.

“Give me 100 of your young men to serve as soldiers for God,” Anansi said, and the villagers reluctantly did just that.

So Anansi returned to his village leading 100 soldiers for God behind him, and once again Anansi proved he was among the world’s finest tricksters. But God knew perfectly well that Anansi had tricked him.