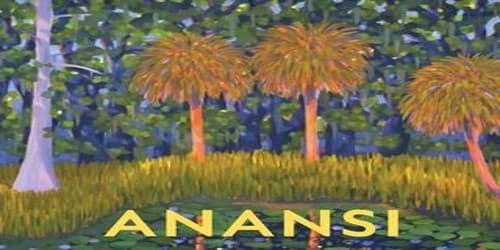 Anansi Meets the Queen (A Tale From the Caribbean)

Tiger was baking cakes and cookies and making stews and soups. He was happy as could be and knew everyone would have a terrific time — everyone, that is, except Anansi.

When Anansi discovered what was happening, he crept to Tiger’s house, peered in through the window, and saw Tiger stirring a soup.

“Mmmm.” Anansi inhaled that delicious aroma and knew he had to go to the wedding.

Tiger said nothing. He went on stirring and dreaming.

“Pssst,” Anansi tried again. “Brother Tiger, you made an itsy-bitsy mistake. You forgot to send me an invitation to your wedding, so I’ve come to pick it up.”

“No mistake, Anansi,” Tiger laughed. “You always play tricks on everyone. Everyone knows that. I don’t want a trickster at my wedding.”

Now Anansi’s legs began to tremble. He thought his tricks were fun. Well, at least he enjoyed them. And besides, he had to go to that wedding. “You better invite me, Brother Tiger! If you don’t invite me, you’ll be sorry.”

Anansi was furious. He skittered away to think up some mischief to make.

Then Tiger began to worry. He hurried to see his bride-to-be ask her what to do, but the moment he saw Anita, he felt so happy he forgot all about Anansi.

But Anansi covered his hands with gloves of leaves, and then he cut the cowitch creepers down and held them far away from his body.

“What’s he up to?” Frog asked Monkey and Bee and Snake and Bird because they were out in those woods, and all of them saw Anansi collecting the cowitch creepers.

“We’d better follow him,” Monkey said. And so they did. They followed Anansi right to Tiger’s house and watched him go into Tiger’s room. They went to the window and watched as Anansi reached for Tiger’s wedding suit. They gasped when they saw Anansi rub those cowitch creepers all over the inside of Tiger’s suit. Now they knew what he was up to.

The animals ran to find Tiger. They told him what Anansi was doing.

The animals huddled together and came up with their own plan.

They hid behind the bushes outside Tiger’s house, and when Anansi crept outside again, a grin across his face, they pounced on him. “Now we have you, Anansi, and we’ll show you!”

Anansi grew pale because he saw that they too had collected a stack of cowitch creepers. The frog was spreading them across the ground.

“Ssssss,” Snake hissed, “we’re going to lay you on this bed of cowitch, Anansi, and we’re going to pay you back for all your tricks.”

But everyone knows Anansi isn’t a friend. They threw him onto the cowitch and rolled him around and around.

Anansi was burning and itching like a field of hay on fire. “Ouch,” he cried, but the animals were laughing, and Anansi knew he had to think fast.

Everyone knows that when Anansi thinks, he thinks up tricks.

Suddenly Anansi said, “Brother Tiger, look! The Queen is coming down the road!”

“No trick,” Anansi cried. “The paper announced the Queen was coming, but you were so busy with wedding plans, you didn’t pay any attention. Now she’s on her way. You must look!”

Everyone knows Anansi is a trickster, but everyone also knows that you never know when a liar might be telling the truth. The animals pricked up their ears.

“Listen, you can hear the people cheering,” Anansi cried.

The animals’ ears quivered, for they did hear a sound. It was only the wind whistling in the trees, but everyone knows the imagination sometimes plays tricks, just like Anansi.

All the animals began to wonder, and they loosened their grip on Anansi. The monkey said, “I’d love to see the Queen,” and a moment later they all turned and ran away to see the Queen, who wasn’t really there.

Anansi jumped up and ran the other way. He leaped right into the cool river.

And that’s how Anansi, the trickster, was tricked by the others but escaped after all. Everyone knows Anansi always makes trouble — and everyone knows he always will.

The “tiger” in the Anansi tales is thought to refer to a leopard but is usually illustrated as a tiger in Western children’s literature.