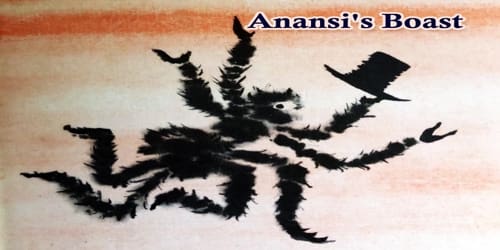 Everybody knows about Anansi, half-spider, half-man, the slyest of tricksters, that fellow who forever brags. Long, long ago, when the world was brand-new, Anansi was even more boastful than he is today. One day he began to stroll around boasting that he was cleverer even than the Creator. “I am the cleverest being in the entire world,” Anansi announced at the top of his lungs.

Soon afterward, the Creator sent a messenger to fetch Anansi, and the message he brought went like this: “Come to see the Creator, and bring along something.”

Anansi was puzzled, for he did not know what he ought to bring along. All-day long he fussed and fretted. He asked every creature he knew, but they only laughed at him. Nobody wants to help Anansi, ever. “You’ve made your own troubles,” they said.

That evening Anansi received another message from the Creator. “If you are as clever as you say,” The message said, “you will easily figure out what it is you are to bring. You ought not to need help with something so simple as this.”

Now Anansi knew he must do something clever indeed, and so, after much thought, he came up with an idea. He called to all the birds he knew, and when they gathered around him, he plucked one feather from each. With all these feathers, Anansi wove a splendid cloak. When the sun rose the next morning, Anansi wrapped himself in his brilliant cloak and flew to heaven.

In heaven, Anansi perched in a tree beside the Creator’s house. When the Creator stepped outside and saw the brilliant bird, he called out to all his creatures. “Come, come see this amazing creature. What can this be?”

Nobody knew the answer. Not even Elephant could tell what this bird was, or if it was a bird and Elephant claimed to be the wisest of the forest beasts.

At last, Elephant bowed his head and said hesitantly, “Anansi might know. He claims to be clever, cleverer than all of us.”

But the Creator said, “I’ve sent Anansi on an errand. He won’t be around for a while.”

“What errand?” the others asked. They gathered in a tight circle around the Creator. “What errand must Anansi do for you?” they asked, and the Creator told those who were gathered about Anansi’s boast.

“He boasted he was cleverer than I, and so I sent him to fetch something.”

“What is he to fetch?” the animals asked, and in the nearby tree, Anansi preened himself and stretched, eager to hear the answer. His plan had worked.

“I’ve sent him to fetch the Sun, the Moon and Darkness,” the Creator answered.

When Anansi heard this, he patiently waited until everyone had gone away. Then he flew down from the tree, tossed his fine feathered cloak to the ground, and set off to search for the Sun, the Moon and Darkness.

Now Anansi was proud of his own cleverness, but he was also clever enough to know that many creatures had knowledge that he didn’t have. He knew Python was wise in a quiet way, so he went to see him in his cave.

“How can I find the Sun, the Moon and Darkness?” Anansi asked, and Python laughed. “That’s easy,” he said. “Just wait here.”

Before long Python returned, holding a bag. “Here they are,” he told Anansi.

Anansi snatched the bag and, retrieving his cloak, flew back to the Creator’s house. There he knocked on the door. “I’ve brought something,” he called. Before the Creator could answer, Anansi opened the bag and drew Darkness from inside.

When he did this, Darkness covered the whole world, and all the creatures cried out, “We cannot see!” Even the Creator could not see, and no one could see him.

“Now I’ll show you the Moon,” Anansi said, and drew the Moon out of the bag. When he did this, everyone could see a little bit, and all sighed with relief and stared at the soft light of the Moon. And then Anansi grinned and said, “Now for my final gift.” He pulled the Sun out of his bag. Suddenly the world was brilliant with light, so bright that some creatures ran and hid to shield their eyes.

“Ah, so Anansi is clever indeed,” the Creator said, “but perhaps he is a little too boastful.”

Anansi, who was nearly blinded by the brilliant light, quickly hid his eyes and though he, might become a little less boastful in the future. He just might, for he wasn’t clever enough to control the Sun. The Creator was the only one who could do that.