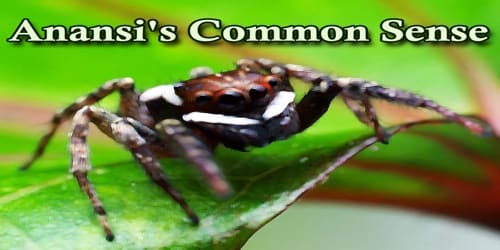 Everyone knows Anansi the spider always has a trick or two, and sometimes three, up to his sleeve. He wants to be the most powerful creature in the world, and he doesn’t like to hear about others who know more than he does. One spring day, a long time ago, he came up with what he knew would be his best plan of all.

Anansi came upon a huge egg that lay on the beach. Now Anansi knew that eggs were precious things, and so he stood nearby and kept an eye on that egg. And before long that egg hatched, and out popped six bright-eyed chicks, and after a while, when they were large enough, they flew away, and Anansi kept that eggshell for himself.

He had a great plan for his egg. He decided he was going to collect all the common sense in the world. He would store it inside his eggshell because everyone knows that eggshells always contain precious things. When others needed common sense, they would have to come to Anansi, and he would charge them for his wisdom. And in this way, Anansi would not only be the creature with all the common sense, but he would also be rich!

And so, in his wily way, Anansi went around collecting common sense from every corner and nook and cranny. He collected every bit he heard and saw and thought, and he put it all inside his eggshell.

As the creatures heard about Anansi’s collection, they came to see him, bringing gifts of corn and sugarcane to pay for his advice.

“When we want to stay dry in the rain, what shall we do?” the hares asked.

“Dig a hole in the ground,” Anansi answered, “and crawl inside.”

“We’re so very tired from flying,” the birds told Anansi. “What shall we do?”

“Sleep,” Anansi said. “And never try to fly when you are too tired.”

“What can we do to stop our children from crying?” the herons asked.

“Teach them to fish,” Anansi said, “and they will never be hungry.”

Anansi felt proud of himself, but still, he went out collecting common sense until, one day, for all his searching, he could find no more.

“At last, I’ve collected all the common sense there is!” he said. But now he was worried that someone might try to steal his eggshell when he wasn’t looking, and he decided that he must find a good hiding place.

He traveled around looking for a good spot, and at last, he spied a tall tree. “There’s where I’ll hide my eggshell,” he said, “way up there under the leaves where no one will see it.”

Anansi knew he must be careful not to break his eggshell on the journey up the tree, and so he carefully tied a rope around its middle, and then tied the two ends of the rope together, and this rope he hung around his neck so that the eggshell rested right on his belly.

“All set!” he cried, delighted with his plan. He began to climb the tree.

Now as you know, climbing a tree is hard work in the best of times, but climbing a tree with a fragile egg next to your belly is harder than you can imagine. Each time he took another step, he feared the egg would break, and he couldn’t grip the tree very well at all. He kept trying and trying, all the while being careful to watch out for the egg, but he kept slipping to the ground again.

As he was struggling to climb, he heard someone burst out laughing, and when he turned he saw a young boy standing not far from the tree.

“Why are you laughing?” Anansi asked angrily.

The little boy laughed again. “You look funny,” he said. “What are you trying to do?”

“I’m taking my egg to its nest,” Anansi answered, and he hoped the little boy would not look inside his eggshell. After all, he needed to hide his common sense.

“If you want to climb the tree, wouldn’t it make sense to tie the eggshell to your back?” the boy asked.

Well, when Anansi heard such a wise piece of common sense coming out of the mouth of such a little boy, he was furious. He thought he had collected all the common sense there was, but if this little boy had so much, then surely there were others who had some. “How did I miss that?” he asked.

Now Anansi was truly furious, for once again the boy had proven that Anansi did not have all the common sense in the world. In his fury, he tugged at the rope that held his eggshell, but he tugged too hard, for he had forgotten that some things require gentle handling.

The eggshell burst into little pieces, and all the common sense scattered onto the ground, and the wind lifted it and scattered it near and far so that everybody got a little bit of common sense, but no one got it all. So the world has Anansi to thank for that.